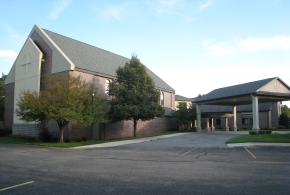 Classis East met in regular session on the morning of Wednesday, September 13, 2017. The churches were each represented by two delegates. Rev. J. Mahtani was the chairman for this session.

Rev. W. Langerak was appointed as the moderator of Byron PRC in their vacancy. Holland PRC, Southwest PRC, and Zion PRC were granted Classical pulpit supply for evening services during their vacancies.

Most of the morning was spent on an appeal by a brother against his consistory. This was appointed to pre-advice committee for recommendations. After thorough deliberations Classis declared that this appeal was illegally before Classis on the basis that his work was not finished with his consistory.

The Classical Committee of Classis East has scheduled a special meeting of Classis East in order to examine Pastors-elect Smidstra (Holland PRC) and Holstege (Zion) at Georgetown PRC on Wednesday, October 18, 2017. Rev. Overway will preside by rotation.

Classis approved the expenses for its meeting of $788.65. The next regular meeting of Classis East will be at Hudsonville PRC on January 10, 2018 at 8:00 a.m. Lord Willing.