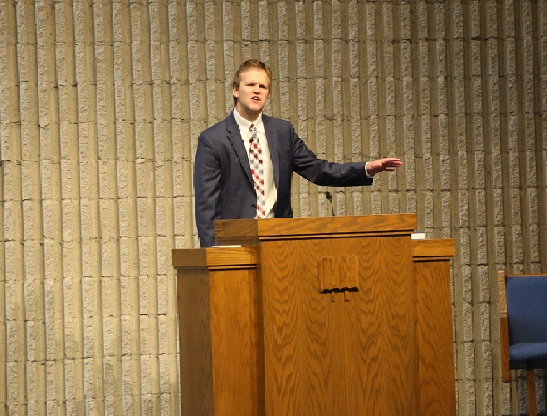 Pastor-elect Jacob Maatman delivering his sermon before delegates of and visitors to classis at Southwest PRC (Wyoming, MI).

Here is one unofficial summary of today's activities and decisions at the meeting of Classis East at Southwest PRC.

Classis met today at Southwest PRC and examined Pastor-elect Jacob Maatman as requested by Southeast PRC. His specimen sermon and examination went very well and Classis approved his examination. In the afternoon, Classis handled the request to form Unity PRC, daughter church of Byron Center PRC. This request was approved. The Emeritation of Rev. Michael DeVries was also approved. He was ordained in October of 1978 in the same room Classis was meeting in today. He served in our Southwest, First Edgerton [MN], First Edmonton [AB], Wingham [ON] and Kalamazoo churches. Classis recessed for the day to give time for the committees to work. Classis will reconvene on Thursday (9/12) at 8 AM. 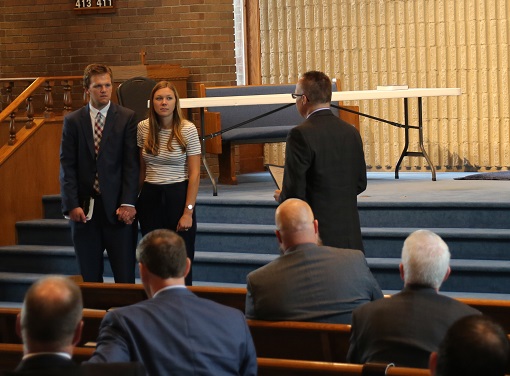 Pastor-elect J. Maatman and his wife Rachel receiving the news of classis' approval of his examination and instructions to Southeast PRC (Grand Rapids, MI) to proceed with his ordination and installation (from president of classis, Rev.H. Bleyenberg). That will take place, D.V., on Friday evening, Sept.27 in Southwest PRC.

We rejoice with Pastor-elect J. Maatman and his family and with Southeast PRC in this decisive step toward the ministry of the Word in our churches, and we thank God for His bountiful grace to the churches.

The following is the official public report of the stated clerk of Classis East:

Classis East of the Protestant Reformed Churches met on September 11 and 12 this year at Southwest PRC. This meeting was chaired by Rev. H. Bleyenberg.

Wednesday morning was filled with the examination of Candidate Jacob Maatman, Pastor-elect of Southeast PRC, Grand Rapids. He preached his specimen sermon on Mark 8: 34-35. The sermon critic committee stated it well, “Jacob demonstrated a good ability to expound and proclaim the gospel of Jesus Christ, and to do so in such a way that a Protestant Reformed congregation would be edified. Jacob’s sermon was faithful and Reformed in the exposition of the text, well-grounded in the biblical and historical context, and included appropriate applications for all of us as God’s disciples.” This was unanimously adopted by the classis and received the concurrence of the synodical deputies.

Candidate Maatman then proceeded to his examination. Throughout he displayed knowledge of God’s Word, a love for the truth, and a willingness to live a life dedicated to service to God’s church. Classis unanimously approved his examination to which the attending synodical deputies concurred. Southeast PRC was advised to proceed to his ordination to the ministry of the Word and sacraments. That ordination took place on September 27, with Rev. Maatman’s grandfather, Professor David Engelsma, officiating.

Byron Center PRC came to Classis requesting approval for the organization of a daughter congregation, Unity Protestant Reformed Church in the Byron Center/Jamestown area. There are 139 confessing members and 90 non-confessing members that intend to become charter members. This was passed unanimously with the concurrence of the synodical deputies. Rev. A. Lanning was appointed as their Moderator. Pulpit supply for the evenings was granted by classis.

Kalamazoo PRC forwarded with their approval the request of Rev. M. DeVries for emeritation, effective January 1, 2020. Classis East approved this request with the concurrence of the synodical deputies. Rev. H. Bleyenberg expressed thanksgiving to our God for the faithful labors of Rev. DeVries. Rev. DeVries labored in the congregations of Southwest, First Edgerton, First Edmonton, Wingham, and Kalamazoo over the course of 41 years. Kalamazoo PRC was also granted pulpit supply for the evening services in January 2020. Rev. D. Noorman was appointed Kalamazoo’s moderator.

In closed session, a consistory sought the advice of Classis to proceed to the second announcement of discipline according to Art. 77 of the Church Order. After hearing evidence of the impenitence of the individual and of the labors of the consistory, classis advised the consistory to proceed.

Thursday was dedicated to the treatment of several protests, appeals and an overture. One appeal was declared legally before classis; however, classis did not agree with the appellant that his consistory was required to respond to or prove wrong every ground or contention if they had already rescinded the decision being appealed. A protest was declared illegally before classis because the requirements of Art. 30 and 31 of the Church Order were not met. Another protest was declared illegal due to the fact classis at a previous meeting did not sustain the same charge, nor the brother’s subsequent protest of that decision. An appeal was sustained with regard to the consistory’s manner of dealing with a complaint and the consistory was advised to deal with the protest in without causing undue delay. Another appeal was judged not legal because Article 30 of the Church Order had not been met. A protest regarding a decision of the May meeting of Classis was not sustained. And classis declared an overture illegal because it did not satisfy Article 46 of the Church Order and it did not meet the definition of an overture in the “Explanation of the rules for Protests, Appeals, and Overtures.”

Classis approved the payment of this meeting’s expenses amounting to $2,859.39.

Zion PRC will host the January 8, 2020 meeting of Classis East.