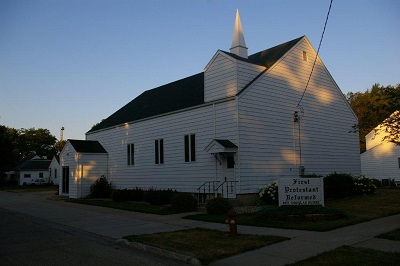 Update from Wednesday afternoon, Sept.30: Pastor-elect Ryan Barnhill successfully sustained his classical exam and Classis West unanimously approved him to serve as a minister of the Word and sacraments in the PRC.

Peace PRC was also instructed to proceed with his ordination and installation, which is scheduled for Friday evening, Oct.9 in Peace PRC (Lansing, IL), with Prof.B. Gritters leading the service.

We rejoice in God's gracious provision of another servant to herald the gospel of sovereign grace. May He continue to prepare this brother for his work in the church of Jesus Christ in our Peace congregation. 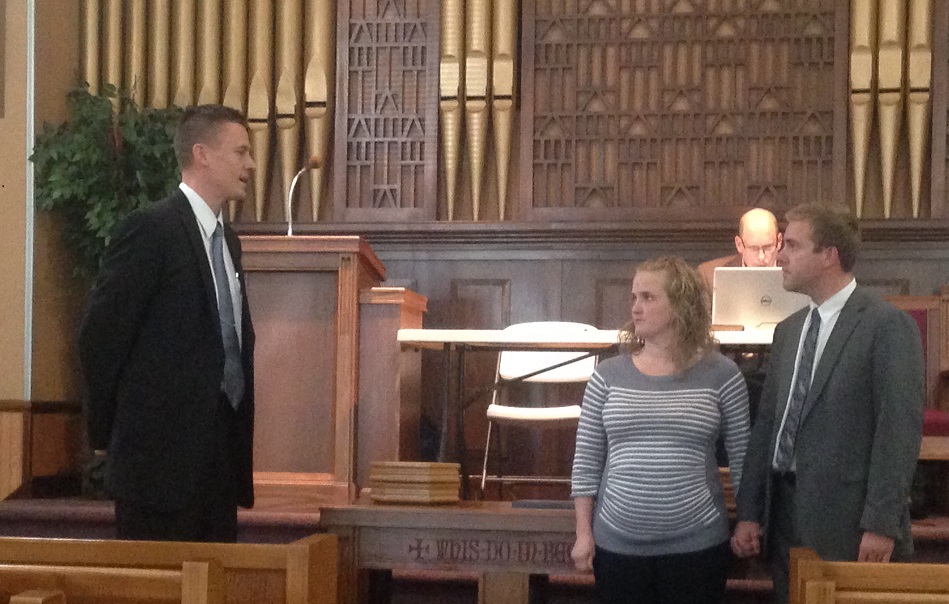 Chairman for this meeting of Classis West, Rev.B.Huizinga, informs Pastor-elect Barnhill and his wife Miranda of its decision.

The Stated Clerk of Classis West provides this official public report of this meeting:

The meeting was preceded by an officebearers’ conference the previous day on the topic “The Local Church and Missions.” In his keynote speech, Rev. Slopsema emphasized first that every local church has the calling before God to do mission work. The church should not think this is optional for her; she also should view it as a privilege, not a burden. The second part of his speech explained that some of the work of missions becomes the work of the denomination, and laid out guidelines for how and when a congregation would turn to the denomination for help. The fourth presentation of the day supplemented this instruction; members of the Domestic Mission Committee spoke on “Promoting Mission Outreach by the Local Congregation.” The other two presentations were by members of Hope PRC and Georgetown PRC, giving overviews of Hope’s work with Rev. Titus in Myanmar, and Georgetown’s work with the Protestant Reformed Church of Vellore, India.
The presentations were informative, and I personally found them encouraging. A hearty thanks to Revs. Griess and Kleyn for organizing the conference, and to those who came from Michigan to take part in it.
After Rev. R. Hanko opened the meeting with an edifying devotional on Zechariah 1:8, Rev. B. Huizinga capably chaired this meeting for the first time in his ministry. .
The highlight of the meeting of Classis was the examination of Mr. Ryan Barnhill, who has accepted the call to serve as pastor of Peace PRC in Lansing, IL. The evening prior to Classis, the delegates of Classis and synodical deputies from Classis East gathered in the sanctuary of Edgerton PRC for an official worship service, at which Mr. Barnhill preached his specimen sermon on Psalm 25:14. Both in his preaching as well as in the rest of the exam, Mr. Barnhill gave good account of his natural and spiritual gifts for the ministry of the Word. With joy, Classis approved his exam and advised Peace PRC to proceed with his ordination. With this decision, the synodical deputies concurred.
Also on the agenda was an appeal of a brother from Peace PRC against a decision of his consistory. Peace PRC was unable to find pulpit supply for its worship services on December 31, 2014 and January 1, 2015. The consistory decided, with the approval of Crete PRC’s consistory, to hold a combined worship service with Crete, under the supervision of both consistories. The brother presented his consistory with several reasons why he considered this decision to be an error and, not satisfied with his consistory’s response, appealed the matter to Classis. Classis decided not to sustain the brother’s appeal for five reasons. Of those five, the first two regard significant principles of the Church Order, and the last three regard matters that were specific to the appellant’s wording in stating his case. I’ll summarize the first two. First, Classis pointed out that at this combined service, the elders of Peace PRC did not relinquish their responsibilities toward their congregation, but rather called the congregation to worship, and were able to oversee both the attendance of the members of Peace PRC as well as the preaching that the members received. In this way they fulfilled the mandate of Scripture in 1 Peter 5:2-3. Second, Classis declared that in so doing both consistories adhered to Article 67 of our Church Order; that Peace PRC did not relinquish their autonomy; and that Crete PRC did not lord it over Peace PRC (something which Article 84 of our Church Order specifies may not happen).
The consistory of Covenant of Grace PRC requested an additional subsidy of $4000 for 2015 and $12,000 for 2016. The reason for this request is that Rev. and Mrs. Kleyn decided to enroll their children in a different school than they had been using since moving to Spokane, which school had significantly higher tuition. Classis granted these requests and forwarded them to the synodical finance committee.
The expenses of this meeting totaled $9362.36. Classis is scheduled to meet next in Crete PRC on March 2, 2016.
The fellowship was again enjoyable. God is to be thanked for giving us the freedom to hold such assemblies claiming the protection of the authorities, and for giving the delegates to this particular meeting safety in travel and freedom to speak the convictions of their heart in love for the churches.
Rev. Douglas Kuiper, Stated Clerk
Last modified on 03 October 2015
Published in Classis West
Related topics: