After observing Sem. Ryan Barnhill examined in church history (Medieval) by Prof.R.Dykstra and NT history by Prof.R.Cammenga, and then to conclude, in practica by his pastor, Rev.G.Eriks, Synod met in closed session to vote on approving the brother's examination and recommending him as a candidate for the ministry of the Word and sacraments in the PRC. 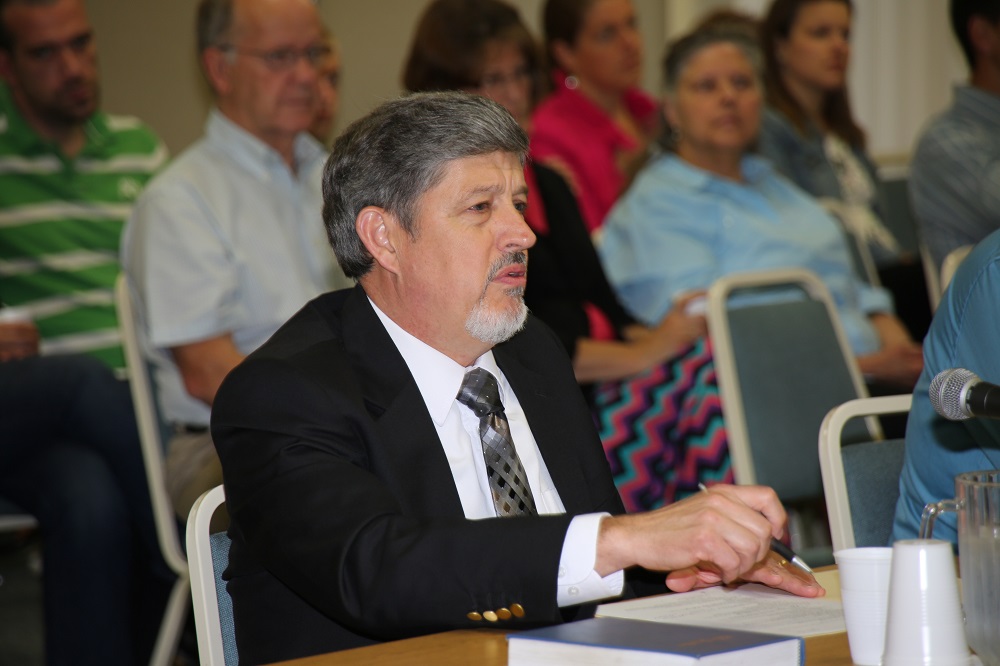 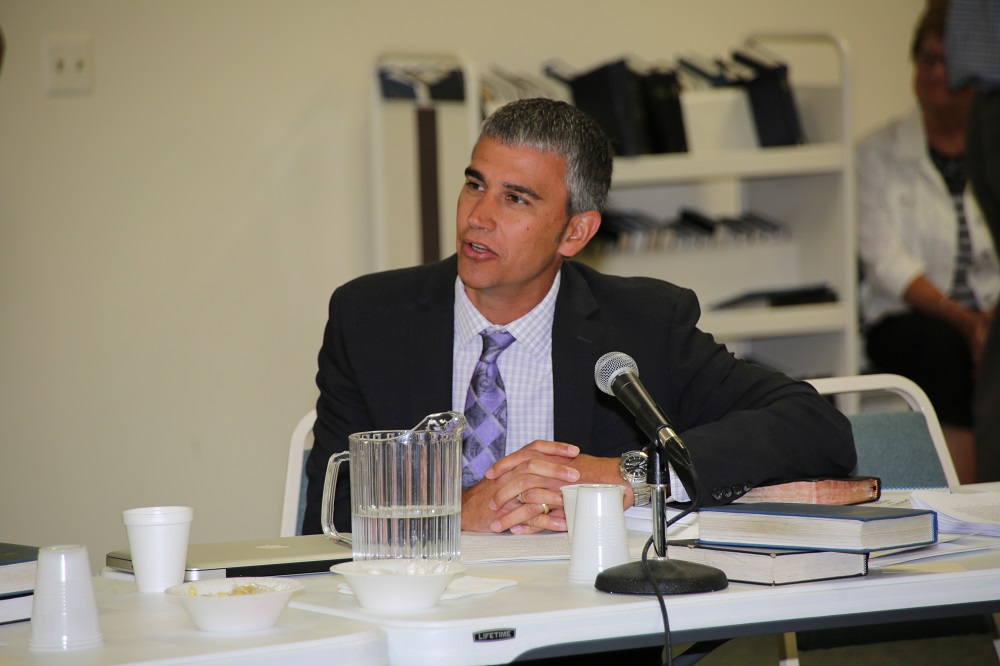 This was unanimously done, and the brother was heartily recommended to the churches as a candidate for the gospel ministry. He was declared eligible for a call on July 11, 2015. 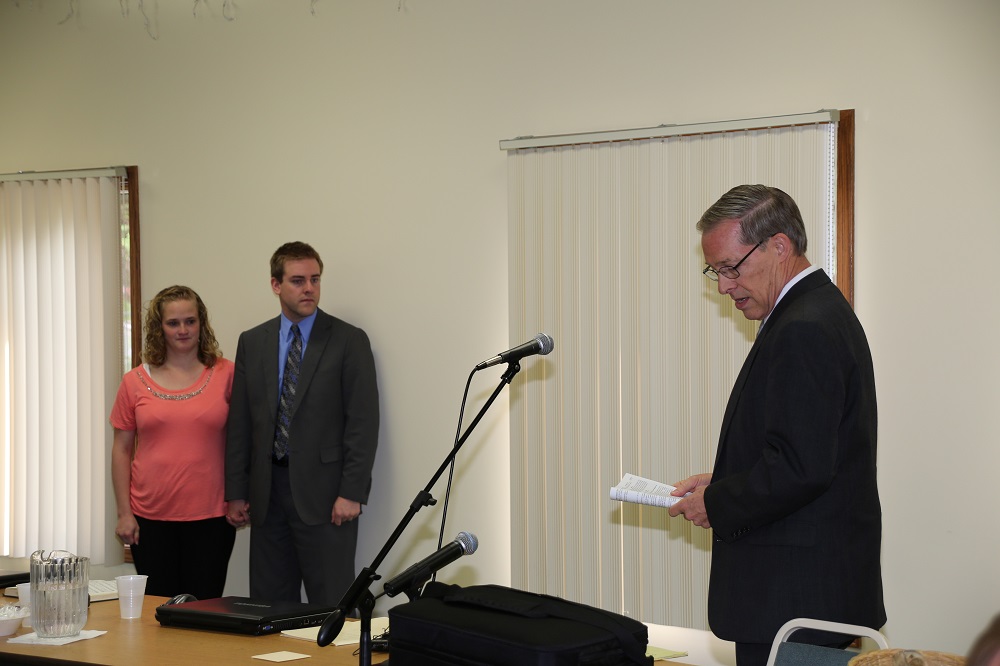 Deep thanksgiving to God was expressed in song and prayer for His faithfulness in providing us another man for the ministry. 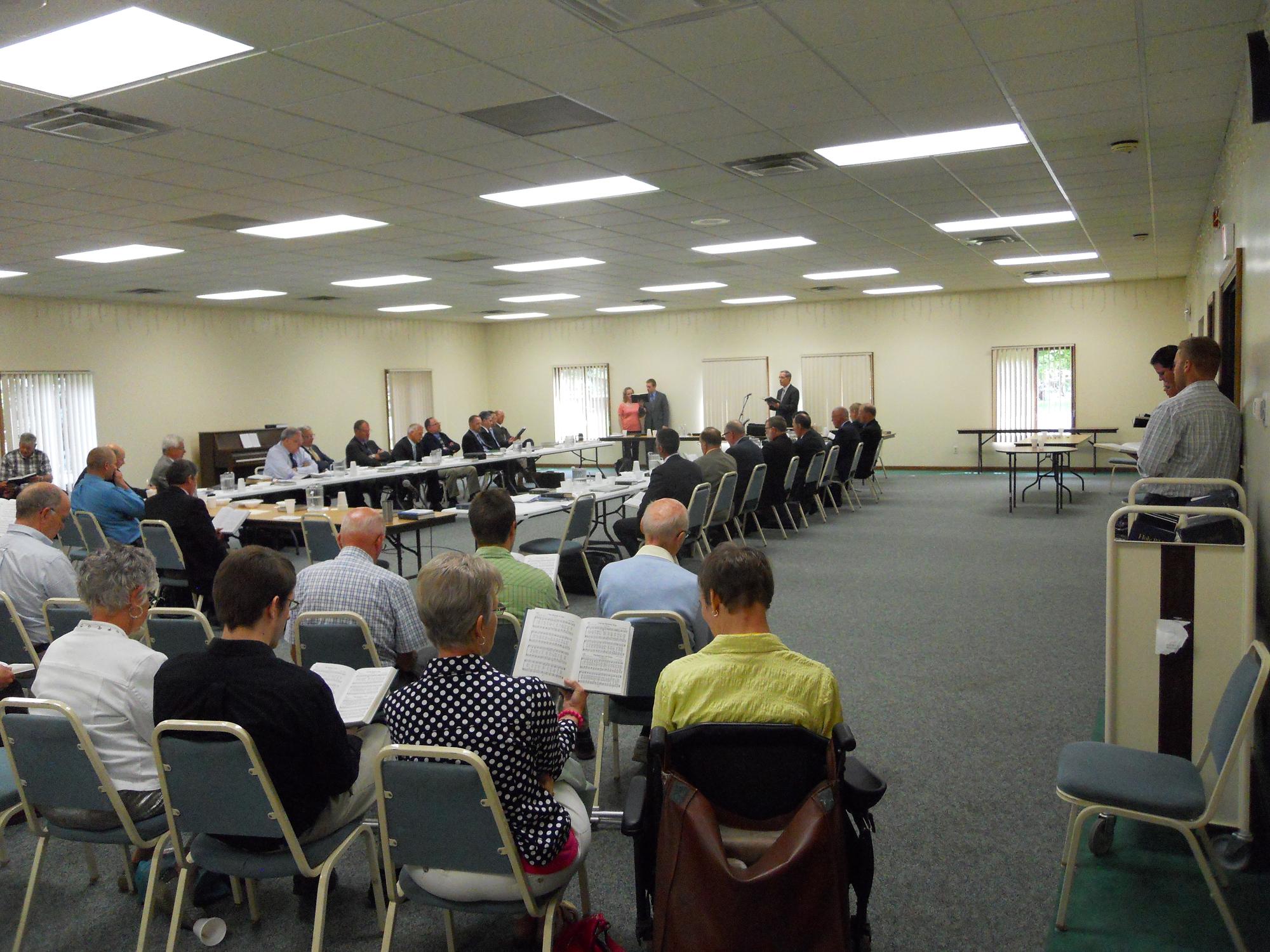 The delegates of synod as well as the visitors were then given opportunity to congratulate the new candidate. 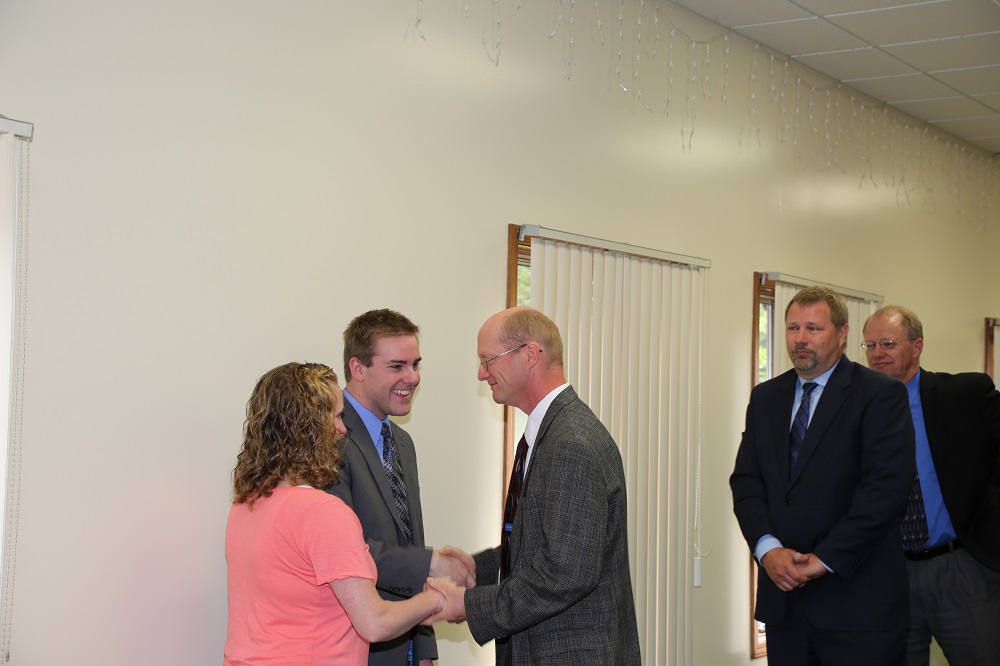 Congratulations from Rev.D.Kuiper, Cand.Barnhill's mentor during his internship last year. 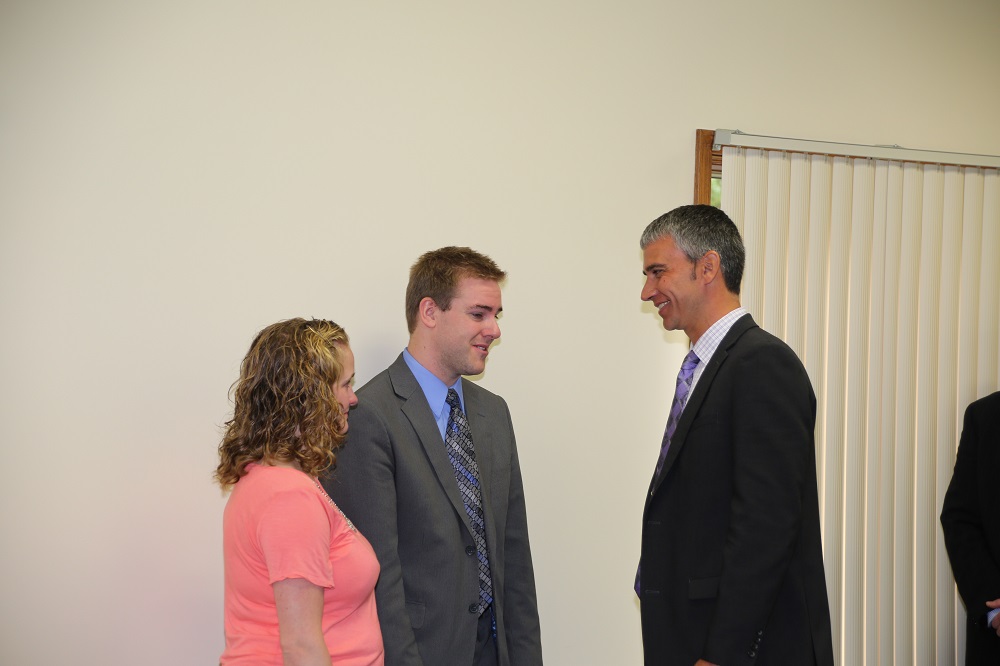 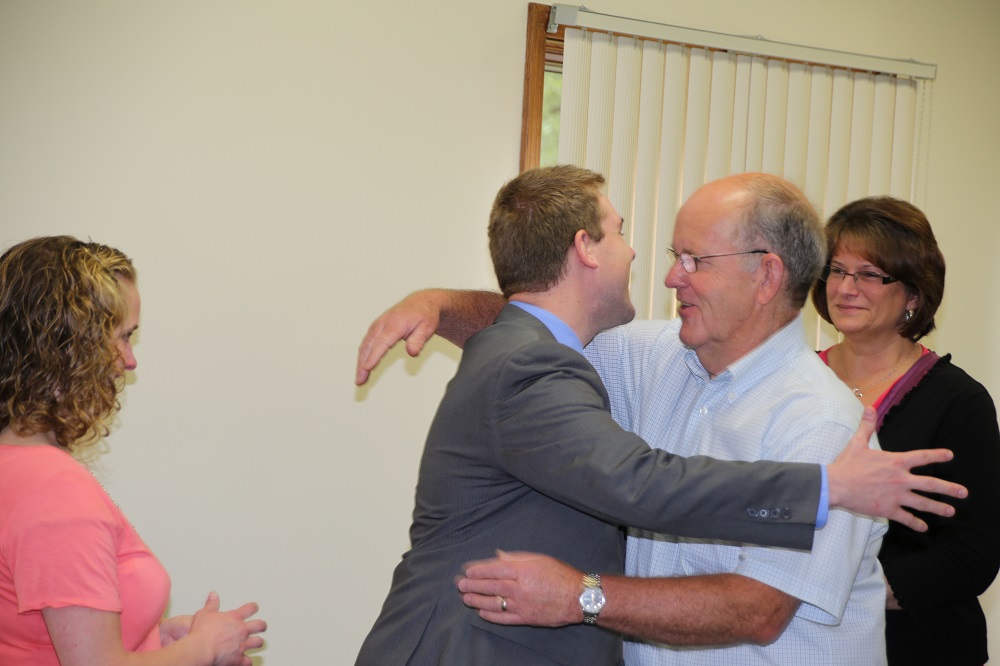 Ryan and Miranda are congratulated by his parents, Les and Bev Barnhill.

The Seminary graduation program for Cand.R.Barnhill will be held this evening in Faith PRC beginning at 7:30 p.m. Prof.R.Cammenga will deliver the address, "The Minister and His Marriage." Afterward there will be an open house for Cand.Barnhill and his family in the church fellowship room. All in the area are invited to attend this event. The graduation will also be live-streamed from Faith's website for the benefit of those who cannot attend. (A copy of the program is attached here in pdf form.) We can now add a few pictures from last evening. 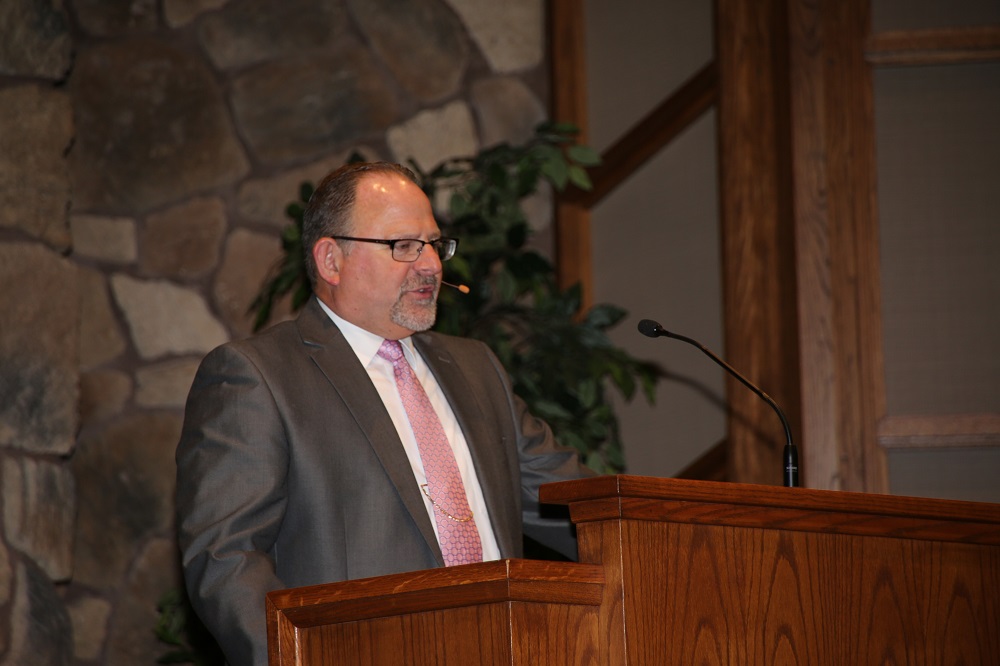 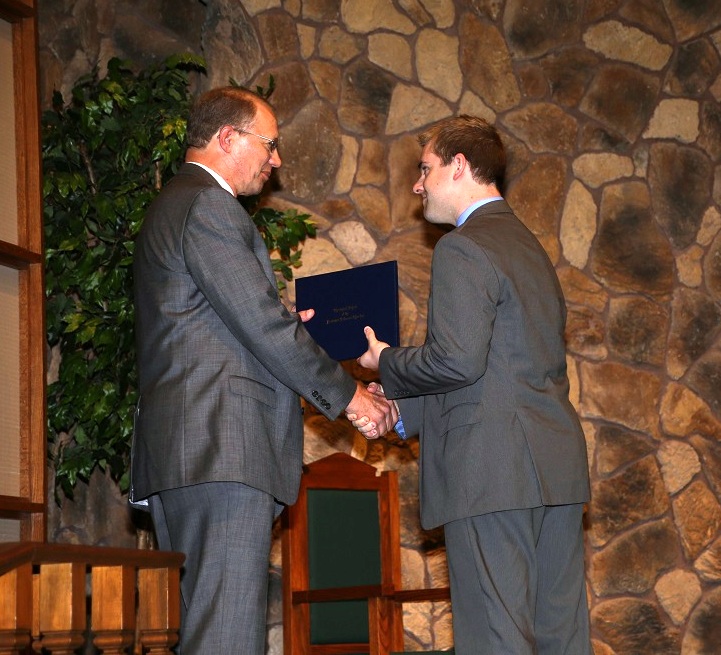 Rev.K.Koole, president of the Theological School Committee presents Cand.R.Barnhill with his diploma. 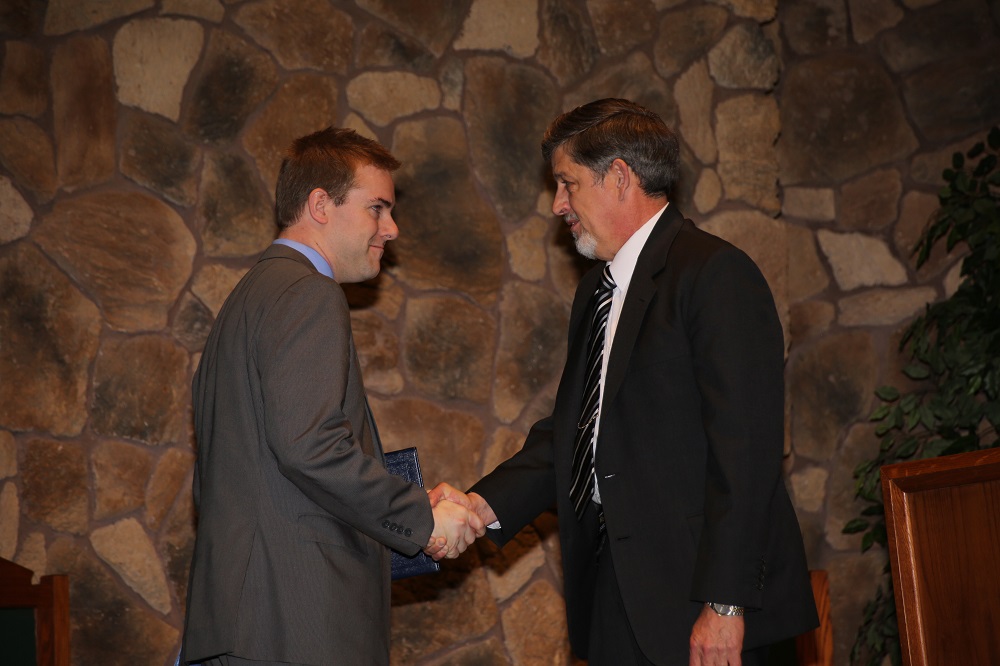 Following its work of examining Sem.Barnhill, synod returned to receiving and acting on its committees of pre-advice.

Mr. Ryan Barnhill sustained his oral examination before Synod and was declared a candidate eligible for call in the churches on or after July 11, 2015. We rejoice in God’s gift of another candidate for the ministry to the churches.

Synod took up the work of the Board of Trustees and noted that the sale of the parsonage in NI has been finalized. Expressions of deep gratitude to God were given for the faithful labors of Mr. David Ondersma (13 years as treasurer) and Mr. Don Doezema (20 years as stated clerk), both of whom are retiring from their respective positions after synod.

All the emeritation requests were approved as were the subsidy requests after careful evaluation.

Rev. Eriks left synod due to a death in his congregation and Rev. Nathan Decker was seated as his alternative.

Synod treated the work of the Contact Committee with both the CERC of Singapore and the CPRC of Northern Ireland. Deacon Tang and Deacon Hall addressed synod on behalf of their respective congregations. Synod received a joint letter from the two churches expressing their desire to establish sister church relationship between one another. Synod not only expressed no objections but great joy and thankfulness to God for opening this manifestation of the unity and Catholicity of the church.

Synod approved the work of the CC with the EPC of Australia and approved a 2017 conference to be held in Australia.

Synod also expressed approval of the CC’s work with the BERG and declared that their explanation regarding the differences between the PRCA and the BERG satisfied the requirement of Synod 2014.

Synod will resume labors Friday morning at 8:00 with the expectation of finishing its work tomorrow.