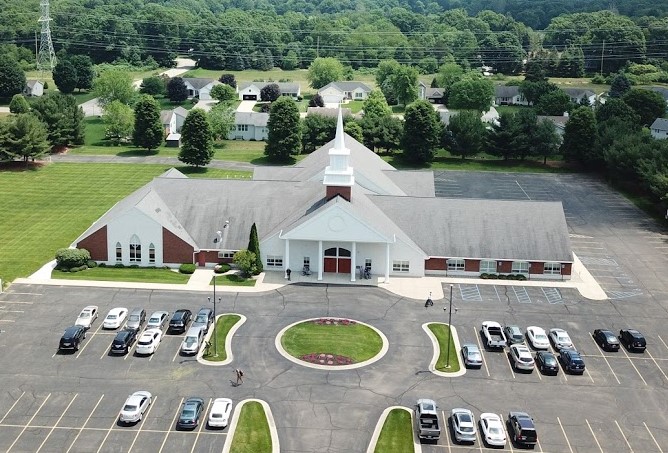 Here follows the public report of the sixth day of meetings for the 2021 PRC Synod being hosted by Georgetown PRC in Hudsonville, MI.

Synod of the Protestant Reformed Churches in America
June 16, 2021
After opening devotions, Rev. Cory Griess read a letter of acknowledgment to the call he has received to serve in our seminary as Professor of Practical Theology and New Testament Studies (see photo below). He plans to answer the call on or before July 4. Continue to remember him in your prayers as he considers this weighty call.

Synod treated another protest that objected on procedural grounds to Classis East’s concurrence to depose a minister according to Articles 79 and 80 of the Church Order. The matter was recommitted to the committee of pre-advice for reformulation.

Synod treated a protest of an individual who objected to Synod 2020’s decision regarding a sermon (entitled “Dealing Rightly With Our Sins”) preached by a former minister in the denomination. The individual’s main contention is that Synod’s decision contradicts Scripture and the confessions and brings Synod 2020 into contradiction with decisions of Synods 2018 and 2019. This matter was recommitted to the committee of pre-advice for reformulation.

A different individual brought a protest against that same decision of Synod 2020. Synod voted not to sustain his protest, judging that the individual had failed to prove his contention that the sermon militated against Synod 2018 by making repentance an instrument to obtain blessings of salvation.

Synod dealt with a protest of a decision of Synod 2020 related to the release of that former minister from the ministry under Article 12 of the Church Order. The matter was recommitted to the committee of pre-advice for reformulation.

Synod took up reformulated advice regarding a protest of a decision of Synod 2020 not to publish a report from a special committee appointed to assist a congregation. Synod did not sustain the protest, but judged that Synod 2020 had acted within its rules by not including in the printed Acts a report regarding a mandate that synod gave to a committee in closed session and that synod treated in closed session.

Synod also considered reformulated advice regarding a protest that objected to Synod 2020 giving instruction to an appellant regarding the form of his appeals after treating those appeals. Synod did not sustain the protest.

Synod approved the dispersing of funds for the financial support of our seminary students. It also approved changes to the constitution of the Student Aid Committee which make clear the uses of the two main funds it oversees.

Synod had before it an appeal of an individual whose objections to a sermon were not upheld by his consistory or Classis. Synod voted not to sustain the appeal, but expressed its agreement with the judgment of the Classis that the sermon did not promote the wisdom of the world; did not promote the Pelagian heresy; did not violate the first commandment; and did not teach the false gospel concerning God, hope, Christ, sin, and the covenant.

Synod approved the work of the Board of Trustees during the past year, including its work with the Investment Subcommittee concerning the synodical investments. The synodical treasurer and stated clerk were reappointed to three-year terms.

Synod approved the financial support of fifteen emeritus ministers and their wives for 2022.

The Stated Clerk was instructed in his letter to the churches to include a notice of the urgent need for seminary students. “The harvest truly is plenteous, but the laborers are few; Pray ye therefore the Lord of the harvest, that he will send forth laborers into his harvest” (Matt. 9:37-28).