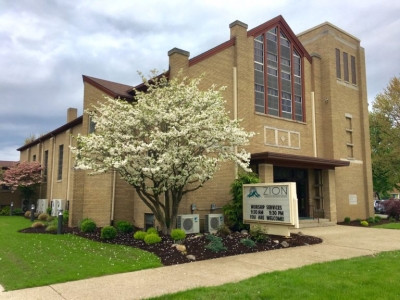 The PRC Synod of 2022 began its second day of work with devotions, and then entered into the examination of Sem. Marcus Wee in the area of Dogmatics (6 loci of Reformed-Christian theology), with Prof. R. Cammenga asking the questions (20 minutes in each section). The examination ended late morning with Prof. B. Gritters asking questions in the area of knowledge of Scripture. Synod then took time for group pictures before lunch. 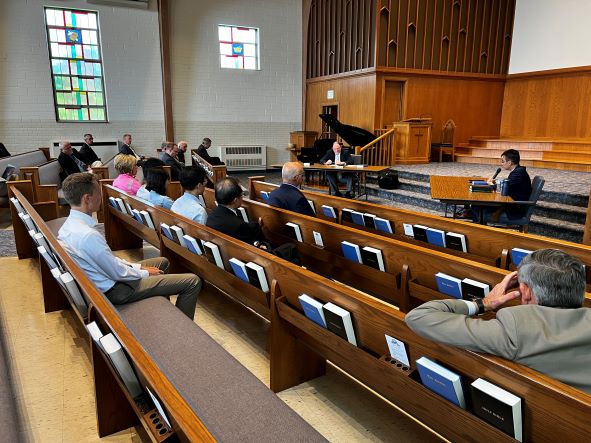 This afternoon, synod will begin working through the advice of its committees, beginning with Committee I.

Prof. B. Gritters examining Sem. M. Wee in the area of knowledge of Scripture 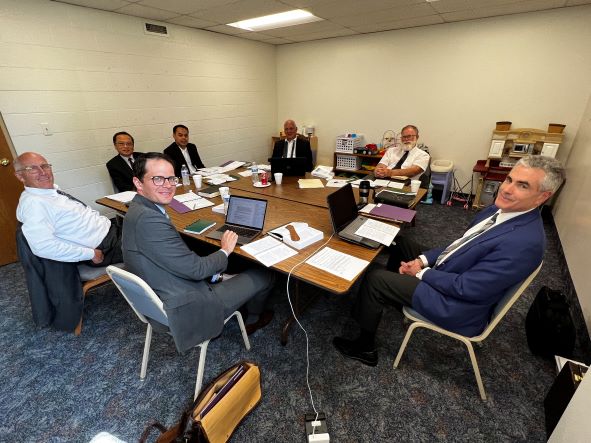 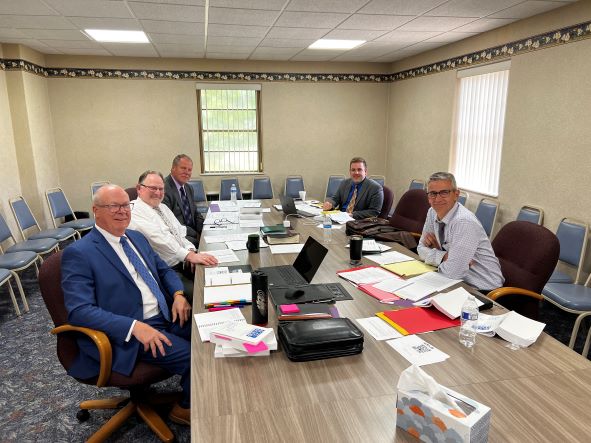 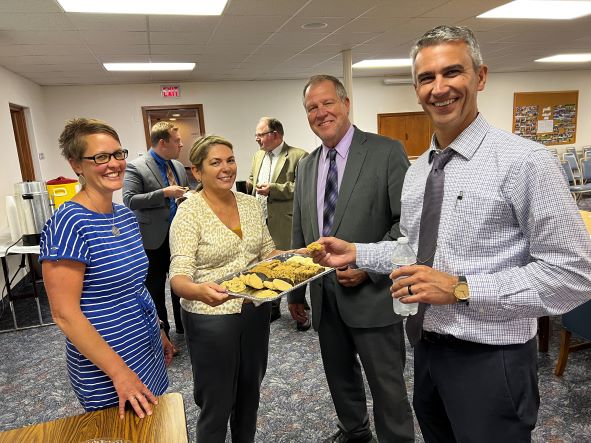 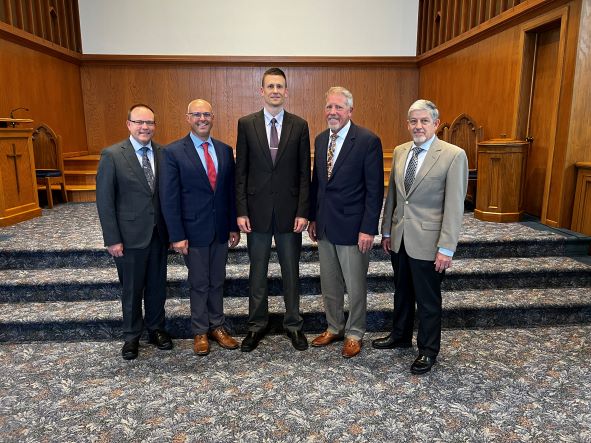 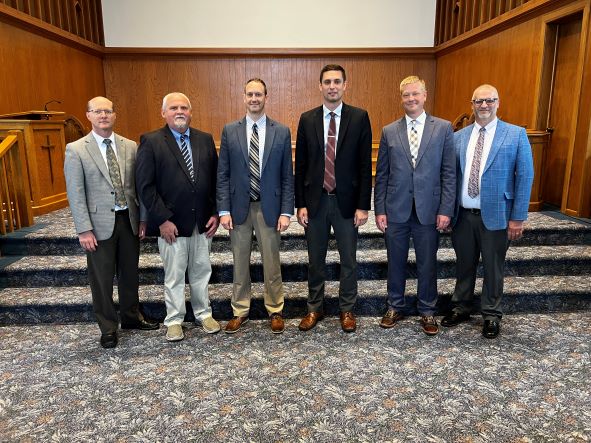 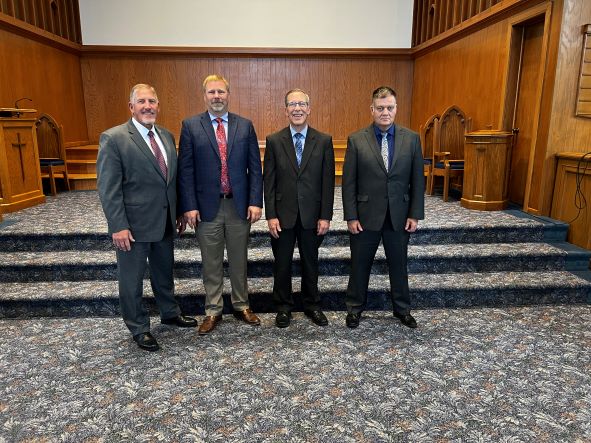 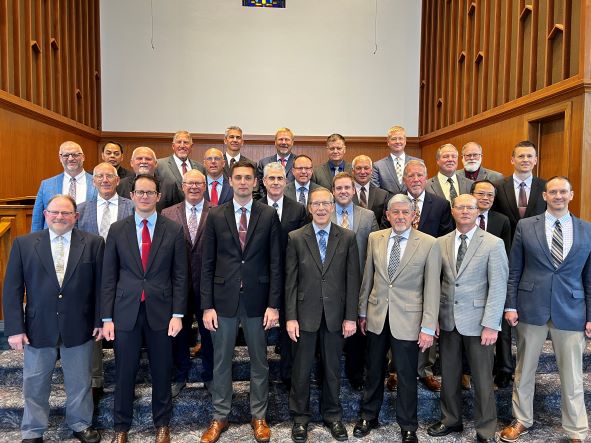 Synod began this morning by singing Psalter 1. Rev. Decker opened with devotions by reading John 13:1-17 and leading in prayer.

The morning session of Synod was spent with the oral examination of Marcus Wee. Prof. Cammenga examined Marcus for 20 minutes each in Theology, Anthropology, Christology, Soteiology, Ecclesiology, and Eschatology. This was followed by Prof. Gritters examining Marcus on the knowledge of Scripture. Marcus gave a good account of what he both knows and believes concerning these subjects. This portion of synod was live-streamed for any who may have been interested, but especially for the saints and Session of the Covenant Evangelical Reformed Church in Singapore.

Most of the afternoon was spent treating the advice regarding the work of the Contact Committee (CC). The Lord has given the PRCA contact with many churches and saints spread throughout the world. Synod began by treating the work of the CC regarding those with whom we have a sister church relationship: the Covenant Evangelical Reformed Church of Singapore (CERCS), the Covenant Protestant Reformed Church Northern Ireland (CPRCNI), and the Protestant Reformed Churches in the Philippines (PRCP). With thankfulness to God, the CC reported that the relationships with each of our sisters remains strong. Yesterday, synod heard a letter from the CERCS. Today, Rev. Vernon Ibe addressed synod with a letter from the PRCP [photo below]. Both letters testified to the value and blessedness of our sister church relationship. 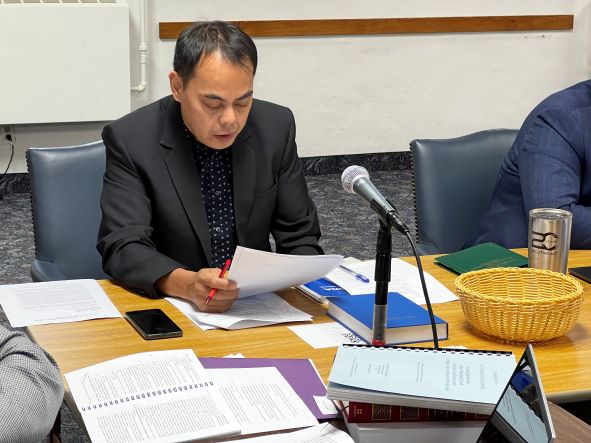 The PRCA also has a corresponding relationship with the Evangelical Presbyterian Church of Australia (EPCA). After approving the work of the CC with the EPCA, Synod had a letter read from the Presbytery of the EPCA on the floor of synod. The letter from the EPCA contained a heartfelt expression of thanks to the PRCA for the care and training of their student, Mr. Isaac Peters. In addition to those with whom we have official relationships, the CC labors with many other contacts. Information was presented at synod on the CC’s work with the Confessing Protestant-Reformed Congregation (BERG) of Giessen, Germany, along with churches and believers in Namibia, South Africa, South Korea, and Mexico.

Synod treated the report of the Psalter Revision Review Committee. The committee members are Belinda Brummel, Don DeJong, Michelle Drnek, Pam Dykstra, Matt Elzinga, Cal Kalsbeek, Steve Kuiper, Rev. W Langerak, and Shelly VanderKolk. The three synodical-appointed advisors are Prof. D. Kuiper, Josh Hoekstra, and Prof. B. Gritters. The Psalter Revision Review Committee provided synod with a helpful summary of their work from this past year. In this coming year the committee intends to finish its review of the Genevans, make a final review of the entire package, and prepare it for presentation to Synod 2023. Synod approved the work of the committee and expressed gratitude to its members for their faithful and selfless labor on behalf of the churches.

Synod approved disbursements made by the CC from the Pastor Training Fund—Foreign Lands and the Foreign Student Assistance Fund as well as approved a budget of $78,000 for the CC’s operating expenses in 2023.

The advice presented to synod regarding the North America Presbyterian and Reformed Council (NAPARC) and Faith PRC’s overture to amend Article 67 of the Church were recommitted to committee one for reformulation.

Synod declared illegal an overture from an individual who asked that "Classis require each of the men of the Special Committee of Classis East (Jan 2018) to assist Hope PRC to explain in writing their doctrinal position regarding the doctrinal statement which they authored.” The one ground for declaring the overture illegal was that requirement of Article 30 had not been met, namely, that “in major assemblies only such matters shall be dealt with as could not be finished in minor assemblies.” Two points of explanation were given to explain the ground: 1) The overture “was a request for action on the part of Classis East and not Synod. He writes: ‘By way of this overture, I request that Classis require each of the men of the Special Committee of Classis East…' (Agenda p. 74). He also writes: ‘However, I believe that this Special Committee of Classis East…must also be held accountable for what they wrote and that it is Classis East’s responsibility to hold them accountable as they are a committee of Classis’ (Agenda p. 75).” 2) “His course of action should have been to protest the decision of Classis East to reject his overture, and then if not satisfied to appeal to Synod. His overture amounts to an appeal to synod, without having first protested to Classis. For Synod to take this matter up would be hierarchical in that it would be taking up work that was not finished at the classical level.”

Synod recessed at 5:00 PM. Synod will reconvene Thursday morning at 8:00 AM to finish the examination of Marcus Wee.

John 13:14, 15, “If I then, your Lord and Master, have washed your feet; ye also ought to wash one another's feet. For I have given you an example, that ye should do as I have done to you.”