The CPRC catechism season ended recently (Monday, 4 April) with tests for most of the twelve students. The children did well, with the encouragement and help of their parents.

After 44 classes over almost a one-year period (literally 364 days), we finished our Tuesday morning classes on Hosea. As well as introducing the prophet and his background in the Northern Kingdom of Israel, we covered his teaching on harlotry, children, agriculture, earlier Old Testament history, Jehovah's law, the covenant, and the knowledge of God. Our new subject is the Mosaic law in Exodus-Deuteronomy, with our first few classes considering the food laws.

Our Wednesday night doctrine class on Belgic Confession 27, after detailed study of the church's four attributes of unity, catholicity, holiness, and apostolicity, covered the election and gathering of the church in our last two meetings. Tonight, we will focus on the preservation of the church. These classes also attract a lot of interest by way of the audios on-line. When we first started our studies on the Belgic Confession, almost five years ago, we did not receive that many hits. Now they are regularly among our most listened to audios (www.cprf. co.uk/audio/belgicconfessionclass.htm). 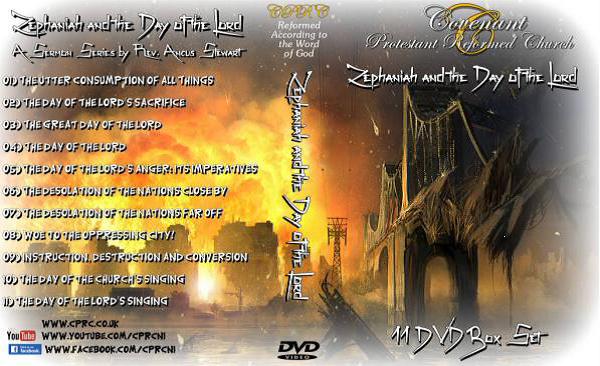 After the 11-sermon series on the three chapters of the ninth minor prophet, “Zephaniah and the Day of the Lord,” we are now on “God's Communicable Attributes.” We have admired His longsuffering, grace, mercy, love, and wisdom. This Lord's Day, we will rejoice in Jehovah's righteousness, D.V.

“Our Identity in Christ” was the subject of the last special lecture in the CPRC (Friday, 18 March) (www.cprf.co.uk/audio.htm#identity). Despite paid advertisements in a local paper, a trailer after our Reformed Witness Hour broadcast, an article in the Ballymena Guardian (17 March), the distribution of hundreds of flyers in the area, etc., it was the worst attendance for any speech in the six years we have been in our church building! We generally find that we have larger audiences for lectures which are more distinctive and/or have an historical aspect.

The day before this lecture, the CPRC had a stall at the annual St. Patrick's Day climb at Mount Slemish, a few miles east of Ballymena. Julian Kennedy, Tommy Duncan, and Marco Barone helped distribute Christian tracts to the hikers.

Last week, we were in South Wales for a speech on “Who Is in the Image of God?” (7 April). Discussions with the saints afterwards were good and the lecture is now on-line (www.cprf.co.uk/audio. htm#identity). As a follow-up, I am planning on “Are Unbelievers in the Image of God?” as the title for the next speech in S. Wales. The false notion that everybody is in God's image is being used to proclaim a love and desire of God for the salvation of all men absolutely, and/or to deny total depravity and eternal punishment, and/or to promote homosexuality and ecumenism with false churches and pagan reli-gions. The imago dei is an important subject also because of the errors involving it!

The CPRC uses the Internet in its witnessing. We are getting almost 2,000 people every day on our main website (www.cprc.co.uk) for written materials. This figure excludes those who listen to our many on-line audios.
The last two months saw the addition of 22 translations to our website (www.cprf.co. uk/languages.htm): 10 Hungarian (by our two trans-lators from Hungary, one of whom, Balint, is coming to this summer's conference in Northern Ireland with his wife, Kati); 5 Czech (by a new translator, Rev. Petr Kulik, who got in touch with us through ordering Herman Hoeksema's Reformed Dogmatics); 3 Spanish (chapters from Rev. Ron Hanko's Doctrine According to Godliness); 2 Italian (Covenant Reformed News articles); and 2 Indonesian (including Prof. Engelsma's pamphlet, “As a Father Pitieth His Children: Reformed Child-Rearing”).

There are now 1,800 videos on our YouTube page (www.youtube.com/user/CPRCNI), thanks to the many hours of work by Stephen Murray putting them on-line. Soon we should reach 200,000 views. The number of people joining us for the live webcasting of our Sunday services and lectures is also growing slowly (www.cprf.co.uk/live.html).

Those of you who have made it to the United Kingdom for all but the most recent British Reformed Fellowship (BRF) conferences will have met Michael Kimmitt. Michael has been a major part of the BRF from its earliest days and served as editor of the British Reformed Journal (BRJ) before Rev. McGeown. Our brother went to be with the Lord (13 February), so Mary and I flew over to North Wales to attend his funeral. The next BRJ will contain a memorial to Michael written by another former BRJ editor, Lind-say Williams.

Chester Mansona of the Limerick Reformed Fellowship (LRF) has recently added about 15 articles from past issues of the BRJ to the BRF website (www.britishreformed.org). New subscribers are al-ways welcome.

The new BRF book, Be Ye Holy: The Reformed Truth of Sanctification, consisting of the speeches at the last BRF conference, is currently being formatted and proofed for publication in the next few months. Any PR church or evangelism committee who would be interested in pre-ordering significant numbers of the book will be offered the work at cost price. Something to bear in mind! I will be sending an e-mail about this to the relevant parties in some weeks' time when we have more facts and figures available, D.V.
Meanwhile, the BRF has been placing advertising, for both the 2016 BRF conference in Northern Ireland on “Behold, I Come Quickly: The Reformed Biblical Truth of the End” and the BRJ, in various British Christian papers. Sadly, the Evangelical Times refused to accept our paid ad for the BRJ and declared that they will no longer accept ads from the BRF or the CPRC. The reason? Because we do not believe that the ever-blessed and omnipotent God earnestly desires to save the reprobate! Faithful creedal Reformed bodies who hold the classic Augustinian position on Jehovah's simplicity and immutability are outside the pale as if they were hyper-Calvinists! Evangelicalism is declining in the UK in numbers, doctrine, and conviction, yet one of the few things they can reject is the truth of God's absolute sovereignty!

Planning for the BRF conference this summer (16-23 July) in Castlewellan Castle is progressing well (http://brfconference.weebly.com). On Monday, 28 March, when driving back after a Lord's Day with the saints in the LRF, Mary and I stopped in at Trim, northwest of Dublin. Though it had come highly recommended, we had not actually checked out this lovely town and its 800-year-old Norman castle before. We were very impressed. It will make an excellent part of one of the conference's two day trips! We are looking forward to seeing both familiar and new faces at the conference in July.

May the Lord be with you all!