Our biennial holiday in North America (17 July—14 August) took us to the Northwest (where we tented and hiked in the mountains: Mt. Rainier, WA; Glacier, MT; and the Canadian Rockies) for three weeks and Grand Rapids (where we stayed with Mary's parents) for one week.

I preached eight sermons on four Sundays in six Protestant Reformed churches (Spokane, Edmonton, Lacombe, Lynden, Providence, and Hudsonville). After each of the four Sunday afternoon or evening services, I showed slides, mentioning the various factors the Lord used to bring the saints in the Covenant Protestant Reformed Church (CPRC) and the Limerick Reformed Fellowship (LRF) into contact and membership with these bodies. Looming large were Reformed books, PR pamphlets, and the witness of current members, members who have since left, or even those who never became members themselves! Rev. Allen Brummel and I both spoke once at an evangelism conference in Lacombe (29 July).

We had a lovely time with family and friends, worshipping in various Protestant Reformed churches, and enjoying meals and hospitality with the saints. All are blessings in Jesus Christ through our sister-church relationship!

Our last call was at the RFPA building, where we picked up a banana box of books (containing especially Mark Hoeksema’s new commentary on II Peter), a briefcase of pamphlets and other literature to pack inside our other items of luggage to bring home. Rev. Martyn McGeown and Josh Harris from South Wales, who were over for the Young People's Convention, also brought back fine RFPA books.

A number of people have asked me if this was really a holiday. Yes, it was very relaxing and I cannot even say I was tired before we left for North America!

A lot of work awaited us on our return: scores of emails (though I had tried to keep up using borrowed computers on weekends while we were away), correspondence with new translators, four weeks’ post, fulfilling orders for books and audio-visual box sets, yard work (mowing lawns, trimming trees, a bonfire, etc.), website additions, etc. Now that we are mostly caught up, I can do the bimonthly letter! 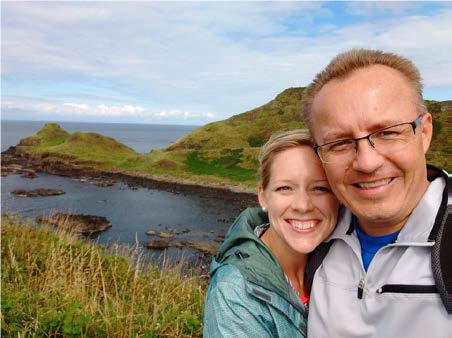 Rev. Heath Bleyenberg was our main pulpit supply when we were away; the Bal-lymena Guardian carried an article about his coming with a photo (27 July). He and Deb were on our side of the Atlantic for three of the four Sundays of our absence.

Elder Brian Crossett led the services with DVD sermons on Sunday 1 in the CPRC. One Sunday 2, Rev. McGeown preached, with the Bleyenbergs in the LRF. On Sundays 3 and 4, Rev. Bleyenberg preached in Ballymena. His four recent sermons in the CPRC, plus his six sermons in Northern Ireland in 2011, are all in a handy YouTube playlist ( www.youtube. com/playlist?list=PL2Y5Eq5r6y2EqoPrvrvwIMUPlJkPXb_Gf ).

The Bleyenbergs stayed with Rev. McGeown in Limerick for a few days and then in the CPRC manse. They visited in the homes of some of our members or went with them on day trips. Their last night in Northern Ireland was marked by a farewell tea at church (Sunday, 13 August).

Near the start of the summer, we held a barbecue at the manse (23 June). Though several were out of the country at the time, 75 CPRC members and friends were pre-sent. It was a fine night.

Our Annual General Meeting (AGM) was held on 26 June. The finances are going very well. Since then, we have received a substantial amount of repaid taxes in the form of Gift Aid, plus the yearly sum for our church building’s solar panels. Our best-selling box set (42) for the last year was “Behold, I Come Quickly,” the 2016 British Reformed Fellowship (BRF) speeches. Our best-selling books were (in order) Called to Watch for Christ’s Return (Rev. McGeown), Be Ye Holy (Profs. Engelsma and Hanko), and Christianizing the World (Prof. En-gelsma). The English Churchman published a lengthy, favourable review of the last title (21 & 28 July).

Earlier this week, Susan Hall and Janet Napier ran a Children’s Bible Club for the younger ones in the congregation (21-22 August).

Besides our older translators, such as Balint Vaserhelyi, who sent us 4 Hungarian pieces in the last two months, a few new helpers have joined us. Their recent translations are 6 Tagalog (by Jeremiah Baghuin Pascual in the Philippines); 3 (Church) Slavonic (ecumenical creeds by Paul in Russia); and 1 Bengali (the Heidelberg Catechism by Rev. Emmanuel Singh in Calcutta, India).

Mary has been working on a complete website overhaul to make the CPRC website more compatible with mobile phones (www.cprf.co.uk). Because of the size of our site, this is a massive undertaking. If you or anyone you know has some time, some computer skills, and is able to do some data entry accurately, we are looking for volunteers to help us. E-mail Mary, if you are interested (This email address is being protected from spambots. You need JavaScript enabled to view it.).

A number of people have asked us about the dates for next summer’s BRF Conference. The conference will be held 21-28 July, 2018, at Hebron Hall near Cardiff, South Wales (www.britishreformed.org). We hope to have booking forms out by the end of this year.
May the Lord strengthen and keep you all!