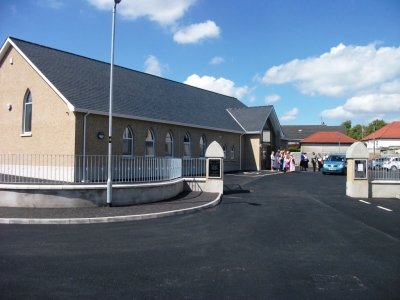 Family visitation in the CPRC has included 24 meetings on 11 different days over 2 weeks (7-21 May). Our Scripture passage this year was Ephesians 5:22-6:8, which deals with the respective callings of husbands, wives, children, fathers, and employees. As always, family visitation was a profitable exercise. Only one visit remains, that with one of our members who is currently studying at a university in Wales.

Our Annual General Meeting (AGM) on 28 May included reports by Stephen Murray (audio-visual), Julian Kennedy (financial), and Rev. Martyn McGeown (missionary). I spoke on our plans for the future, covering events, speakers, books, etc., involving the CPRC in the next year, DV.

In the last year, our best-selling book was Called to Watch for Christ Return by Rev. McGeown, and our best-selling box set (CD or DVD) was “Celebrating 500 Years of the Reformation,” consisting of the 10 speeches and sermons by Prof. Engelsma in the CPRC in the autumn of 2017. The visitors on the written pages of our website (www.cprc.co.uk) have averaged 1,880 per day over the last year, which marks steady growth year on year.

In January - May, 2018, our most hit audio was “Job's Comfort and Our Comfort” (Lord's Day 1). Over the same period, the 10 countries that listened most to CPRC sermons were, in order, the United Kingdom, the United States, Germany, France, China, Israel, Australia, Qatar, Canada, and South Korea. Turning to the top 10 countries for the written pages on our main website for the first 5 months in 2018, we have the United States, the Netherlands, Indonesia, Brazil, the United Kingdom, Peru, Italy, Russia, Germany, and Hungary. If we remove from this list the English-speaking nations (USA at #1, UK at #5, and the Netherlands at #2, for almost all the Dutch speak English), there is a strong correlation between the remaining 7 countries included in the top 10 and the languages in which we have a lot of translations: Italian, Portuguese, Hungarian, German, Indonesian, Spanish, and Russian.

The CPRC has (or very soon will have) two new lady members. First, we received the membership papers of Larisa McGeown from First Holland PRC (6 June). Second, Grace Mae was born to David and Kristin Crossett (20 June); she is to be baptized this Sunday (1 July). 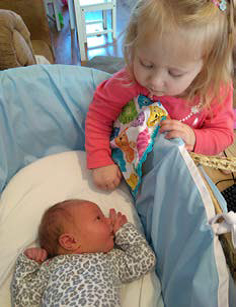 Our Tuesday morning Bible study has moved to the topic of the Old Testament sacrifices. Currently, we are working our way through the 6 main stages in offering bloody sacrifices. So far, we have covered the presentation of the animal, the laying of hands upon the beast, and its slaughter, in connection with our Saviour's cross.

This year, I was the CPRC delegate to the Synod at Byron Center PRC in mid June, my first time at the PRC's broadest assembly since 2002. I hasten to add that there were various good and wholly innocent reasons for my lengthy absence, including that attending Synod means that the CPRC goes without live preaching for a Sunday. This is the first year that Mary's parents will not be able to come to the biennial British Reformed Fellowship (BRF) Conference and the opportunity to stay with them tipped the balance in favour of going to Synod.

It was good to witness the working of Synod, especially since our congregation has no broader assemblies on this side of the Atlantic. I enjoyed fellowship with the ministers, elders, and professors, as well as the brethren from the Philippines and Singapore. I was also pleasantly surprised that I was able to watch other people working while I was largely inactive, with less difficulty than I had expected!

While in Grand Rapids, I gave a speech on “Gottschalk: Medieval Confessor of God's Absolute Sovereignty” in Georgetown PRC and sponsored by Trinity PRC (13 June). This amazing ninth-century monk spent some two decades under house arrest for teaching, by God's Spirit, the truth of unconditional election and reprobation, particular atonement, irresistible grace, and the perseverance of the saints. He even boldly and uncompromisingly denied the well-meant gospel offer, in the faithful tradition of Augustine of Hippo and Fulgentius of Ruspe, declaring, “All those whom God wills to be saved (I Tm 2:4) are without doubt saved, nor can any be saved but those God wills to be saved. Nor is there any one whom God wills to be saved, and is not saved, since our God has done all things whatever he willed [Ps. 135:6]. They therefore are all saved—all whom he wills to be saved.” The video of the Gottschalk lecture is on-line, including the slides and the Q. & A. session (www.youtube. com/watch?v=9hKDOcaTbFA).

Our Lord's day in America (17 June) was spent in Chicagoland in 2 churches we had not seen for some years. First, I preached in Crete PRC (Jude 20-21), after we joined the saints the previous day for their annual church picnic. Second, I spoke in Bethel PRC (II Kings 6:8-23), where I also gave a PowerPoint presentation on the witness of the CPRC. Our thanks to Phil and Karen Van Baren and Fred and Rose Iwema for their kind hospitality.

Mary and I then flew to Washington DC for a few days of informative and enjoyable sightseeing at the capital, including Arlington National Cemetery. Arriving in Dublin on Saturday, I preached in the Limerick Reformed Fellowship (LRF), while Rev. McGeown was in the CPRC.

We brought back a good weight of RFPA books, especially Here We Stand, edited by Prof. Cammenga, and The Belgic Confession: A Commentary, volume 1, by Prof. Engelsma. Chief among the pamphlets we transported home are “The Bible Versus Mormonism” by Rev. Hanko and “Spousal Abuse in the Reformed Community” by Prof. Engelsma. All such materials help our witness to God's truth, and encourage saints in the British Isles and other parts of the world.
Others

On 28 April, Marco Barone was interviewed live by phone on Iron Sharpens Iron Radio in Pennsylvania in connection with his fine book, Luther’s Augustinian Theology of the Cross: The Augustinianism of Martin Luther’s Heidelberg Disputation and the Origins of Modern Philosophy of Religion (www.ironsharpens ironradio.com/podcast/april-26-2018-show-with-marco-barone-on-luthers-augustinian-theology-of-the-cross). His article on the “500th Anniversary of Martin Luther's Heidelberg Disputation” was published in the English Churchman (27 April & 4 May).

Our thanks to saints from England, Northern Ireland, Ohio, Michigan, and Illinois who recently donated to the CPRC Translators Fund. The last 3 boxes of books we posted out went to 2 ministers in Kenya and a Brazilian pastor in the Azores, a cluster of islands in the Atlantic Ocean belonging to Portugal. In the last couple of months, we added 14 translations to our website: Hungarian 7, Greek 4, Swahili 2, and Portuguese 1 (www.cprf.co.uk/languages.htm).

We are now just a few weeks from the 2018 BRF Family Conference on “The Reformed Family—According to the Word of God” with Prof. D. J. Engelsma and Rev. A. Lanning in S. Wales (21-28 July). We are delighted that as many as 108 people are booked in, including a good number of our translators.

Some 4,500 copies of the new BRF book, Behold, I Come Quickly, consisting of the speeches and sermons at the 2016 BRF Conference are due to be published any day now. This excellent little volume will be available from many PR congregations in America and Canada, the churches in the Philippines and Singapore, and the CPRC Bookstore of course.

Thank you for your interest and your prayers. May the Lord continue to bless and keep you!