Dear saints in the 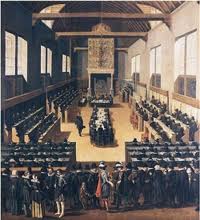 This year marks the 400th anniversary of the conclusion of the great Synod of Dordt (1618-1619). As the only church in Northern Ireland which subscribes to the Canons of Dordt (and loves the truth they teach), the CPRC wanted to commemorate this milestone in the history of the church of Jesus Christ.

So we asked Prof. David Engelsma, who embodies the message of Dordt, to give speeches on this worthy subject. He gladly agreed and set about preparing four lectures which would (1) explain the events which led up to the Synod; (2) set forth the positive teaching of the Canons and (3) the errors that they reject; and (4) cover the other ecclesiastical decisions at Dordt. The Engelsmas stayed in Northern Ireland for almost a month (11 April - 7 May).

Our celebrations began with a half-day conference under the theme “The Original Five Points of Calvinism: The 400th Anniversary of the Canons of Dordt” (Saturday, 13 April). The two excellent lectures were entitled “The Onset of the Great War: Ecclesiastical and Doctrinal” and “The Confession of the Gospel (of Grace): The ‘Five Points of Calvinism’ (as the Content of the Canons of Dordt).” A lovely lunch was served at church between the two lectures.

Besides our two American guests, a fine turnout by the members of the CPRC, and several visitors from Northern Ireland, eleven saints flew in to join us for the weekend: five from Wales, one from Germany, and five from Hungary. This was our first meeting with two of the young Hungarian men and they are now among our translators (www.cprf.co.uk/languages/hungarian.html)

That Lord’s day (14 April) was an especially blessed and well-attended day of fellowship with the saints. The congregation and visitors enjoyed tea together after the evening service.

On two Wednesday evenings, Prof. Engelsma gave his remaining speeches on Dordt: “The Defence of the Gospel: The Rejection of Errors” (17 April) and “The Other Decisions of the Dordt Synod and Their Importance for the Reformed Churches Today” (1 May). The videos of all four of the Professor’s lectures, plus their question-and-answer sessions, are on a handy playlist on YouTube (www.youtube. com/playlist?list=PL2Y5Eq5r6y2GAFwEiN6AHNQ6vKraJdLJf). His speech on the errors rejected by Dordt will be published in written form in the upcoming, special issue of the British Reformed Journal, devoted to the 400th anniversary of the Canons of Dordt.

The CPRC probably spent more money and effort advertising these superb speeches on Dordt than any other event in the last 20 years. We wrote articles and placed ads in the weekly Ballymena Guardian and the monthly In Touch. We even paid for a large colour advertisement in the Belfast News Letter (11 April).

Prof. Engelsma also preached five times for the CPRC, with four of these sermons being on Romans 7 (www.cprf.co.uk/audio/ visitorsermons.htm), the chapter on which James Arminius was preaching in Amsterdam when he especially revealed his heresy. After Prof’s last sermon (on Romans 7:14-16), on the evening of Sunday, 5 May, the congregation bade the Engelsmas farewell. Their time here passed so quickly. 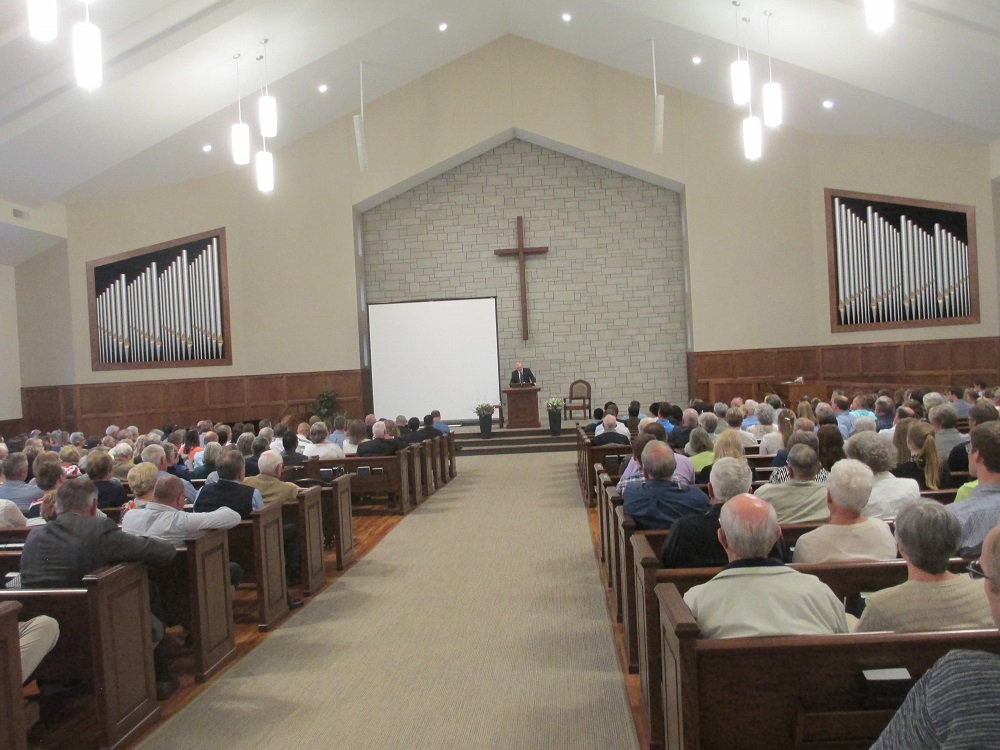 With Prof. Engelsma filling the CPRC pulpit at both services on Sunday, 28 April, I was able to accept an invitation to speak at “Dordt 400,” a conference sponsored by the Protestant Reformed Seminary and hosted by Trinity PRC in Hudsonville, Michigan (25-27 April). The lectures, fellowship, and organization were excellent. The RFPA is to be heartily commended for its plan and work to produce a book from these speeches later this year, Lord willing.

Besides spending time with family and friends, I preached in Grandville PRC and Hope PRC that Sunday (28 April). After the evening service in Hope, Mary and I enjoyed Rev. Titus’ presentation on the Lord’s work in Myanmar.

In order to prepare for my lecture at the American conference, I chose “The Canons of Dordt: The Original Five Points of Calvinism” as the title of a speech in South Wales (21 March). We had a lovely visit with friends in Bristol and a very good night with the saints at the lecture.

Along with a few Protestant Reformed ministers on other nights, I was interviewed on Iron Sharpens Iron Radio (5 April) by Chris Arnzen on issues pertaining to the Canons of Dordt. Besides inviting people to come to the two Dordt conferences in N. Ireland and America, I spoke about God’s sovereign grace, especially in regeneration or the new birth (John 3:1-12), and repeatedly got out of answering any question pertaining to gynaecology (www.cprc.co.uk/isiin terview1.mp3)!

The delay in writing this letter is not because there is little to report. Instead, there has been so much to do that, alas, something had to give way. Sadly, it was my (ordinarily, bimonthly) letter. But now that I am getting caught up on things, I resume this very pleasant duty. However, I must wholly omit some matters and be brief regarding others, for a fair amount has happened since my last letter (27 December) and I would like, if possible, to fit my report on two pages.

This year’s church visitors, Rev. Koole and Peter VanDerSchaaf, came with their wives, Pat and Dorothy, respectively, which always makes a good visit even better (10-17 January)! Besides preaching twice for the CPRC (13 January), Rev. Koole gave a special lecture on “The Reformation and Family Worship” (16 January), about which a local newspaper carried a short article.

We also enjoyed the visit of Deane and Donna Wassink (Georgetown PRC) with Mark and Kristin Bleyenberg (Grandville PRC). The Wassinks first came to Northern Ireland to help in a Christian school for about a year (1984-1985), so they are old friends to some here and new friends to others. Deane gave an engaging presentation on the witness in Vellore, India, after a Sunday evening service (3 March).

Between these visits to Northern Ireland from our American brothers and sisters, Mary and I flew to the US, having heard that her mother (Ruth Hanko) was not doing well. When we arrived at Sunset Village in Jenison on Friday, 8 February, we heard that she had died that morning. Mom’s funeral was the following Monday. After spending time with Mary’s dad, we flew home late that week. On this visit, I preached at Faith PRC and Providence PRC (10 February).

On 14 March, Marco Barone, a member of the CPRC, and before that a member of the Limerick Reformed Fellowship (LRF), flew to Michigan to marry Paula Kuiper (23 March). One of our Italian translators, Marco has moved from southern Italy to the Republic of Ireland to Northern Ireland and now to the United States—four different countries.

Another brother whom we met through his on-line translation work for us, Tibor Bognar, arrived in Northern Ireland to join the CPRC on 14 January and is settling in well. May the Lord continue to build up His catholic or universal churches by His Word and Spirit!

Thank you for your prayers and support,