The faculty of the PRC Seminary have just published the next PRC Seminary Journal. The April 2015 issue (Vol.48, #2) contains the speeches given last Fall (September 2014) at the Classis West officebearers' Conference hosted by Peace PRC, Lansing, IL.

The theme of this conference was preaching, and as you will see from the cover of this Journal (below), the topics covered were broad and significant - for ministers of the Word, for elders and deacons, but also for all of God's people who hear the gospel each Lord's Day.

In addition, there are a good number of book reviews in this issue, including two lengthy review articles. The April 2015 issue makes for profitable reading for pastors, officebearers, and people "in the pew." 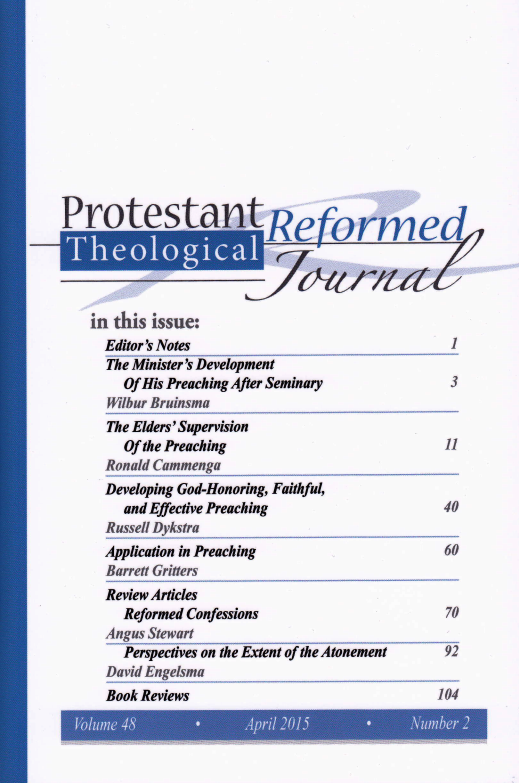 Prof.R.Cammenga, editor of the PRTJ, introduces it with these words:

Preachers are what we aim to train for the church of Jesus Christ in the Protestant Reformed Theological Seminary. We aim to produce pastors who are preachers—chiefly preachers. As preaching is the chief, from a certain point of view the only task of the minister, so does all the instruction in PRTS have as its goal the development of sound, capable preachers of the gospel.

Classis West of the Protestant Reformed Churches in America sponsored an officebearers’ conference prior to its September 2014 meeting. The speeches presented at this conference make up the main contents of this issue of the Protestant Reformed Theological Journal. Domestic missionary of the PRCA, the Rev. Wilbur Bruinsma, gave the keynote address: “The Minister’s Development of His Preaching after Seminary.” In his speech Rev. Bruinsma not only emphasized the need for the minister’s development as a preacher after graduation from seminary and once in the active ministry, but also gave a number of concrete suggestions with a view to this development. The remaining speeches were given by the faculty of PRTS: “The Elders’ Supervision of the Preaching,” “Developing God-Honoring, Faithful, and Effective Preaching,” and “Application in Preaching.” We hope that our readers, especially ministers and seminary students, will find these articles to be worthwhile.

Besides the conference speeches that have been put into print, readers should take note of the two review articles that are included in this issue. Past issues of PRTJ have contained reviews of the individual volumes of Reformed Confessions of the 16th and 17th Centuries in English Translation, edited by James T. Dennison, Jr., as they were published. Recently the fourth and last volume of this very worthwhile set was released. With the completion of the set, Rev. Angus Stewart, minister in the Covenant Protestant Reformed Church in Ballymena, Northern Ireland has submitted a review article. You will definitely want to read what he has to say. Another significant book that has recently been published by B & H Publishing Group (formerly Broadman and Holman Publishers) is entitled Perspectives on the Extent of the Atonement: 3 Views. Emeritus Professor of Dogmatics at PRTS, Prof. David Engelsma, offers readers an insightful analysis of this new book. At the same time, his review article is a passionate call to Reformed churches and officebearers to defend the biblical and confessional truth concerning the redemption of the cross of Christ. That cross, an offense and stumbling block to so many today—also in the church—is “the power of God, and the wisdom of God” (1 Corinthians 1:24).

You may find this issue in digital form at the Seminary's Journal page (pdf for now; Mobi and ePub coming soon). If you would like to subscribe to this Journal, kindly call or write the Seminary at the information provided on its website homepage.

For more Seminary news and pictures, visit the Seminary's homepage.

More in this category: « Seminary News - January 2015 Spring and Summer Report from the PRC Seminary - June 2015 »