Undoubtedly the highlight in recent months was the baptism of Chester and Dale Mansona, two brothers who with their parents have been attending the LRF since April 2011. It has been my privilege to catechise them in Bible History, Heidelberg Catechism, Essentials, and a pre-confession class covering the Belgic Confession, the Canons, and some of our distinctive doctri-nal positions, such as common grace, the unconditional covenant, the Bible on divorce and remarriage, worship, the calling of church membership, etc. At the end of the summer, the CPRC Council interviewed Chester and Dale and approved their request for baptism. The happy occasion took place on September 2 and I preached on Colossians 3:1-4, “Seeking the Things Which Are Above.” 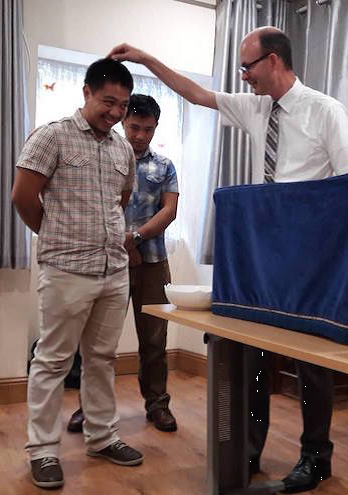 Our official activities also began again after the summer break in the week commencing September 2. I have four catechism classes: two on Mondays with my three nieces, Anna, Lily, and Hope, via video link (Old Testament History for Beginners, Book 2; and New Testament History for Juniors); one on Wednesdays (Old Testa-ment History for Beginners, Book 2, with Sebastian, Jason, and—for the first time—Penelope; and one on Saturday mornings (Essentials of Reformed Doctrine) with Colm and Irini. The children are on Lesson 11, while the Essentials class, an adult class, is on Lesson 12 (the Mediator and his names).

In our Tuesday evening Bible study we re-cently finished the post-exilic historical books of Ezra, Nehemiah, and Esther; and we have begun I Peter. Recent sermon series included Psalm 103 (eight sermons) from July 29 to September 16 and a series (ongoing) on the Miracles of Jesus. I preached on many of the healing miracles between June and December 2016, but now I am concentrating mainly on the other (non-healing) miracles of our Saviour: turning water into wine, multiplying bread, walking on water, cursing the fruitless fig tree, etc. In addition, we have just started the sacraments section of the Heidelberg Catechism again.

At the beginning of November, Chester and Dale Mansona, Larisa and I attended an “Answers in Genesis Conference” in Athlone, about one and a half hours northwest from Limerick. Not only were the speeches good, but we also met Janet Napier from the CPRCNI and two of her children, as well as James Steele, a friend of the CPRC from Londonderry, at the conference. We also met a lady from Limerick who has since started coming to our Bible studies—she is a neighbour of Noel Kelly, who also attends the Fellowship. She has agreed to bring Noel to the Bible study every week, and she has also expressed interest in coming to our services, but so far she has not come. Pat, another somewhat regular attendee, expressed interest in having his daughter visit our Bible study. He says that she needs good teaching, so we shall see if she begins to attend our studies on I Peter. 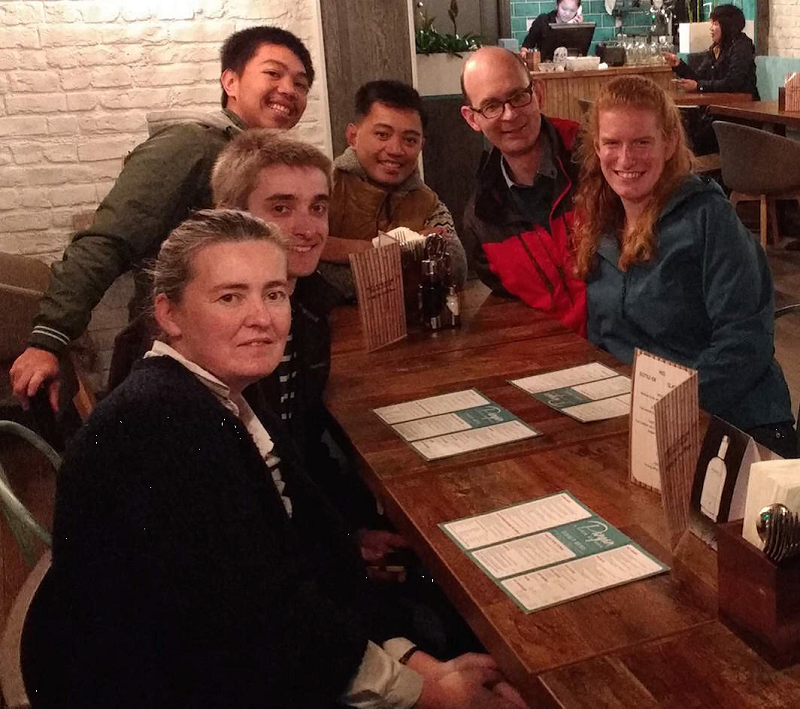 Another very exciting recent development was an email I received on August 17 from a young man in his early twenties. His email was entitled, “Catholic Seeking Alternative,” in which he expressed his disgust at the recent scandals in the Roman Catholic Church. I met with him on his lunch break the next day and discovered that he had been reading the Bible and Reformed websites and had come across the LRF website. He has been attending the LRF ever since—many of the services and most of the Bible studies. There are hindrances to his coming, however. His mother suffers from a very serious illness, for which she recently had surgery, so that he has had to look after her and even bring her to the hospital on certain Sundays, a work of mercy. He is also only one of two qualified drivers in his household, which means that his family either need the car on Sundays or want him to drive them to various places. When he cannot get to the services, he listens to the sermons online. He also has friends whom he wants to invite to the LRF, but they are quite hostile to Protestantism. Until recently, he and his friends attended Mass regularly, which is quite rare among the youth. Some of his friends even tried to persuade him to attend the papal mass held by pope Francis in Dublin on August 26, but he declined to go. We continue to pray for him, his mother, brothers, and friends.

Colm Ring managed to persuade a goodly number of people to come to one of our worship services recently. He encountered a number of young men from the “Church of God” in Dublin singing hymns in Limerick city centre. He took the contact details of one of them and invited him to the LRF. The he called us to see if we would host them for Sunday lunch (Colm and Irini usually have Sunday lunch with us). We agreed, expecting three to five people. However, on Sunday morning, the day after the Creation Conference, a larger group arrived, 12 adults and 3 children! That same weekend, Sam Watterson and Manuel Kuhs were in Northern Ireland and we had also invited Emily-Kate and Felicity Kuhs to join us for lunch. With Colm, Irini, Emily-Kate, Felicity, the Church of God people, Larisa and me, we had 21 people crammed into our house, and we did have adequate food (stir fry) to feed them all, although we had only 11 chairs. I preached on LD 23 (“Righteous Before God”) and we had a discussion about regeneration with a couple of the men—the “Church of God” is an Arminian “Holiness” group. After lunch, three of the young men sang Amazing Grace for us and then they all headed up to Dublin. I am still in contact with the group and hope to arrange another meeting with them. 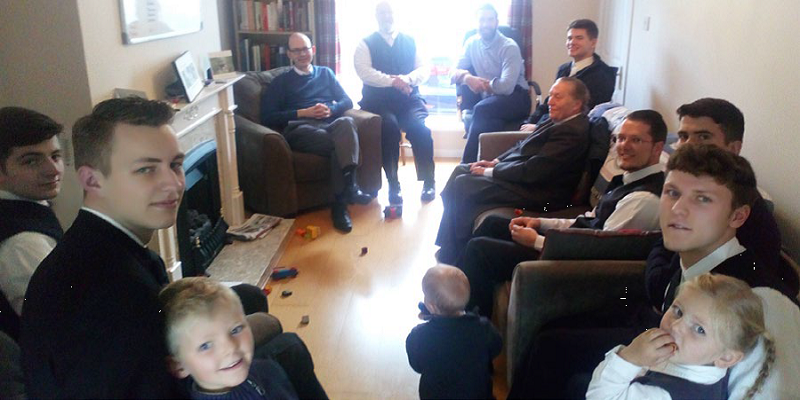 We have also had other visitors in the past few months: Brian and Holly Fournier and their four daughters, a Reformed Baptist family from Massachusetts (September 2); my parents (September 9); Todd and Julie Wagenmaker, parents of Bethany who attended the LRF in 2014 while on a study abroad program (October 7), and Rev. Ken Koole (October 17). Next weekend, we plan to have Julian and Marie Kennedy from the CPRCNI; and the following weekend, we look forward to welcoming Larisa’s mother, Cindi, and Larisa’s aunt, Lori, to the Emerald Isle. 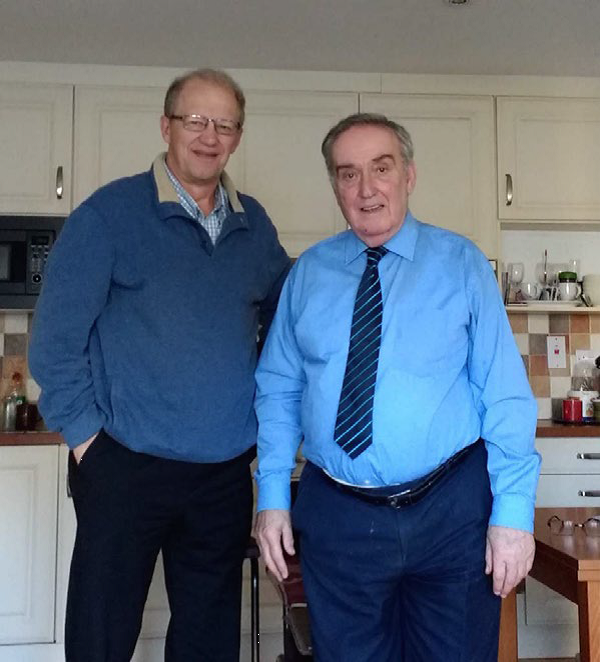 As you have probably seen, the RFPA has published two books that I have written: Grace and Assurance: the Message of the Canons of Dordt and Micah: Proclaiming the Incomparable God. Feedback has been encouraging.

Pray for us, as we do for you,