Protestant Reformed Churches in the Philippines 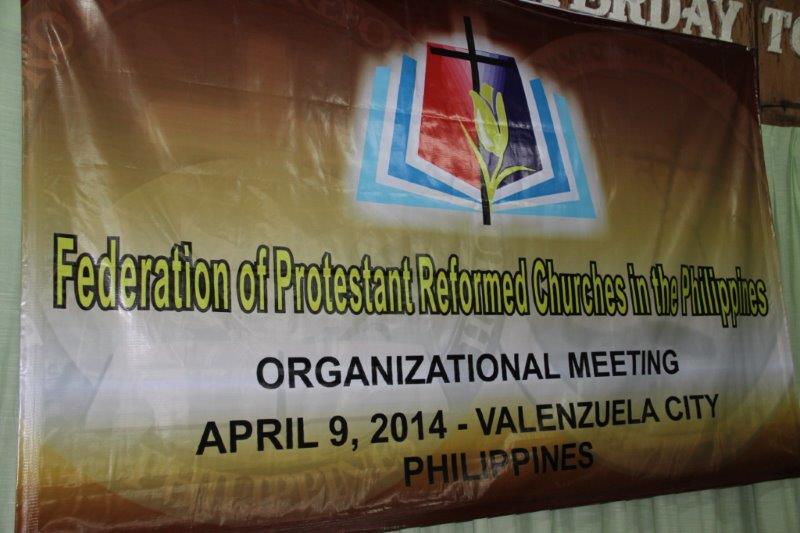 As the delegation of Profs. R. Cammenga and R. Dykstra continues their visit to and work in the Philippines on behalf of the PRC Committee for Contact with Other Churches, Rev.D.Kleyn posted on his blog Friday Dec.17 a summary of their work so far. The report contains many profitable pictures with descriptions of their labors.

Below is a glimpse at some of the visits and works done so far; visit the post to find the complete summary.

In response to a request from the PRCP (Protestant Reformed Churches in the Philippines), a delegation from the Contact Committee of the PRCA traveled to the Philippines in December 2015 to begin the work toward the goal of establishing a sister-church relationship between the PRCA and the PRCP. 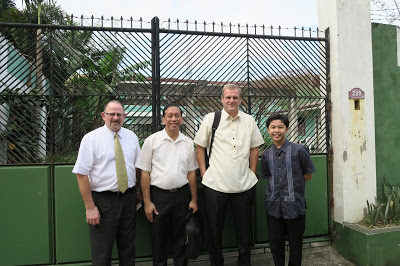 On Sunday, December 13, Prof. R.Cammenga preached in Provident Christian Church. Outside the church gate with Bro. Bien Montoya and his son BJ. 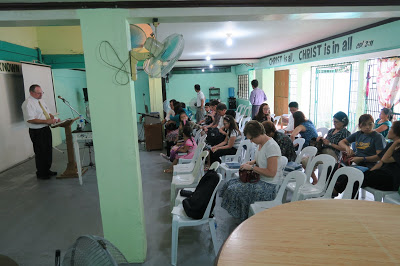 Just before the worship service. 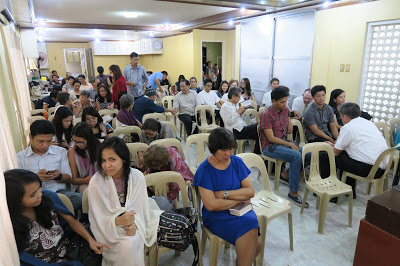 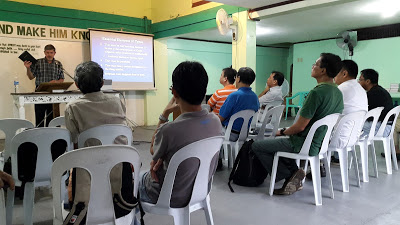 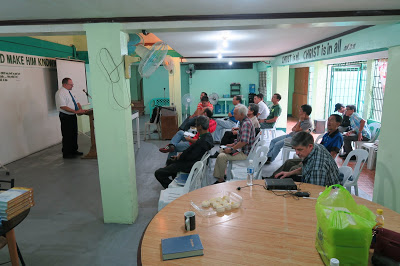 Prof. R.Cammenga spoke on the Assurance of Salvation.
Read more...

The Classis of the Protestant Reformed Churches in the Philippines met on Saturday, October 31. 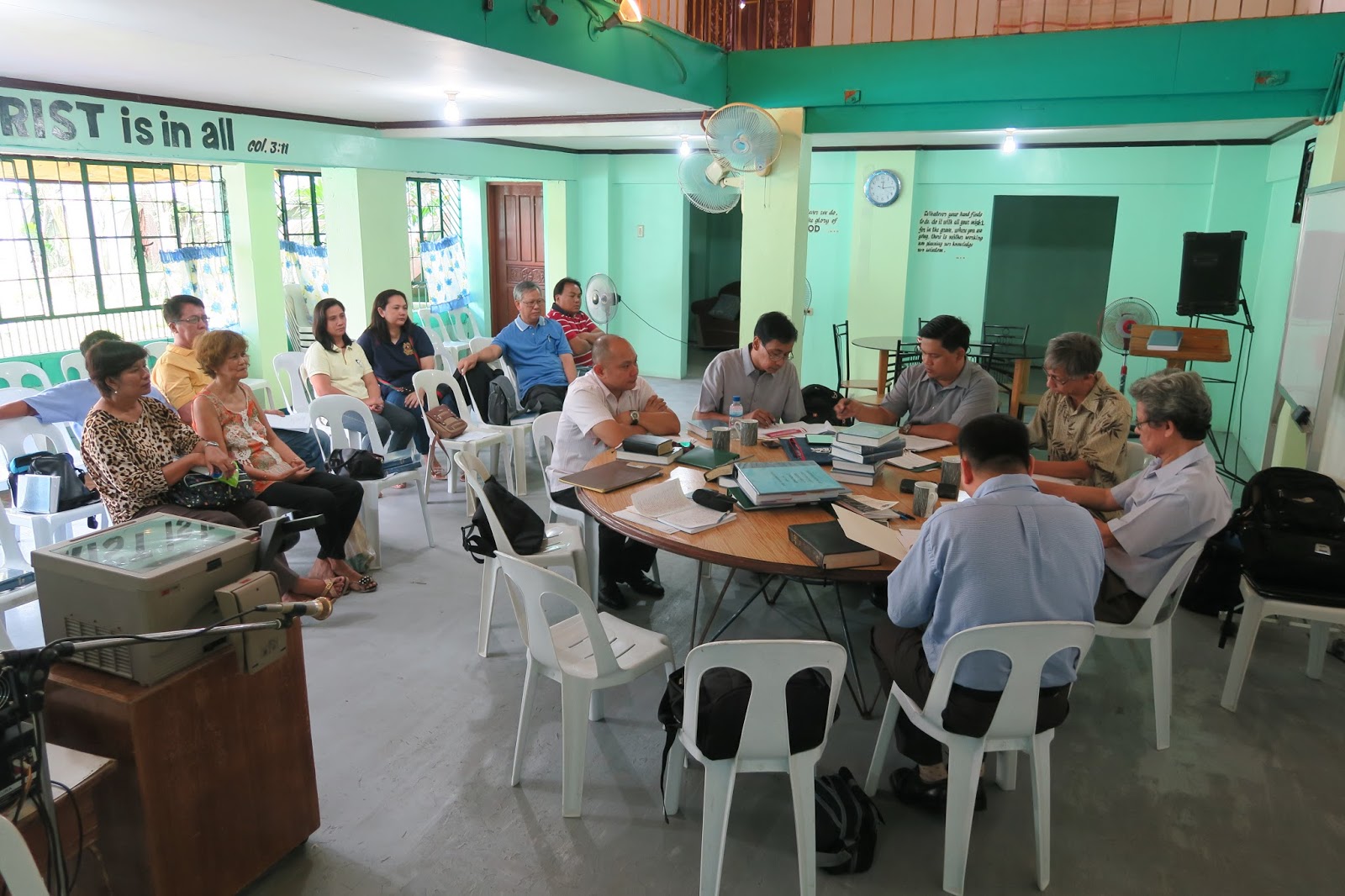 One of the main items on the agenda for the classis was the consideration of a request from the Maranatha Protestant Reformed congregation (Valenzuela, Metro Manila) to join the federation with the Berean PRC (Masinag, Metro Manila) and the First PRC (Muzon, Bulacan).

Rev.Daniel Kleyn, PRC missionary-pastor to the Philippines, has posted a report with pictures on his blog about this meeting and its work. You are encouraged to visit that post, but we may also provide this summary from that report.

One of the main items on the agenda was the request of Maranatha PRC in Valenzuela to join the Federation of the Protestant Reformed Churches in the Philippines.  There have been many meetings and months of preparation to determine if we were one in doctrine and faith.  Our Protestant Reformed missionaries (especially Rev. R. Smit) have also labored for many years in this congregation.  We now report with joy, and with thanks to the Lord, that Classis voted unanimously to receive MPRC into the federation. 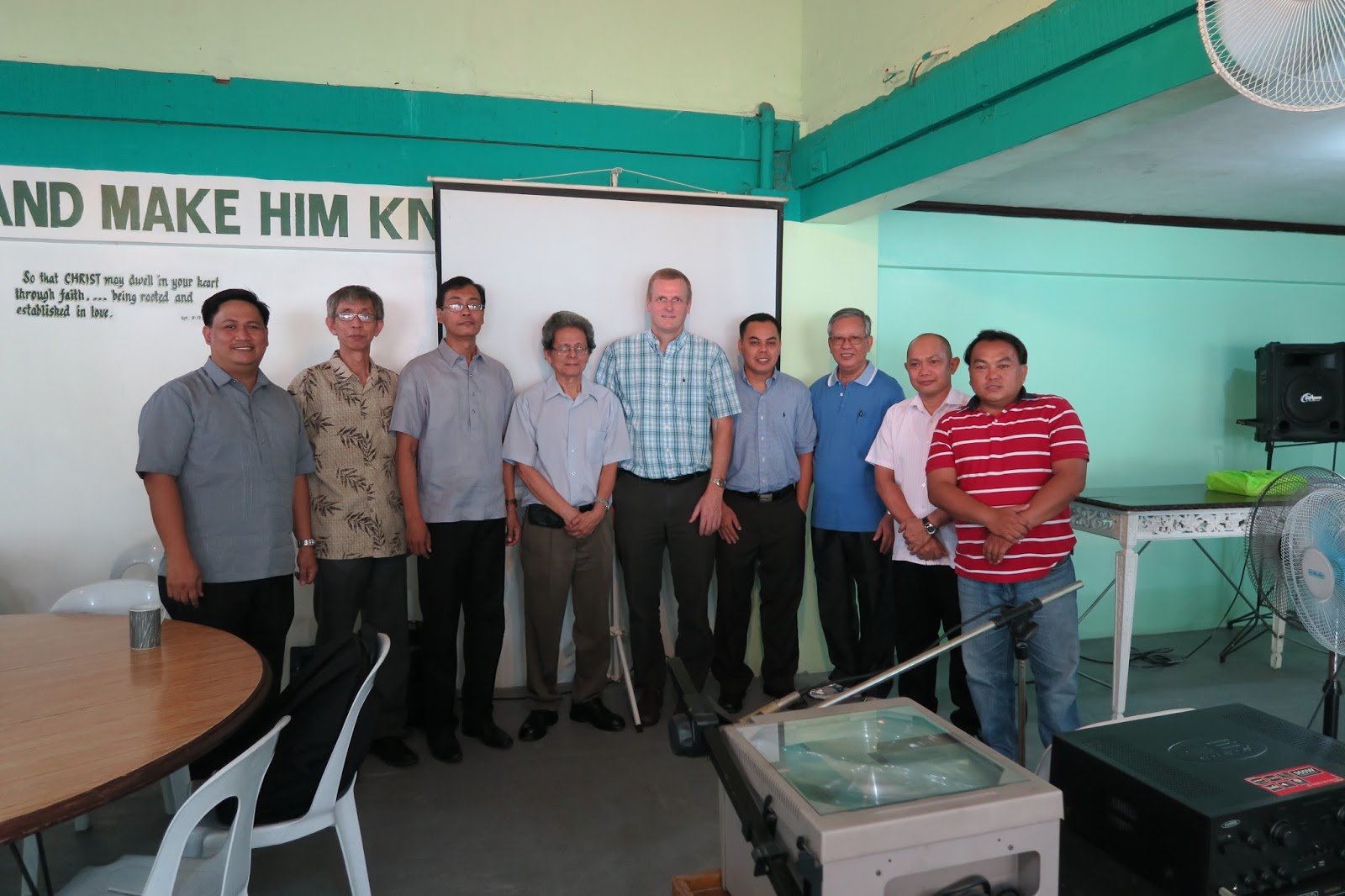 The delegates with the pastor and elder of Maranatha PRC. 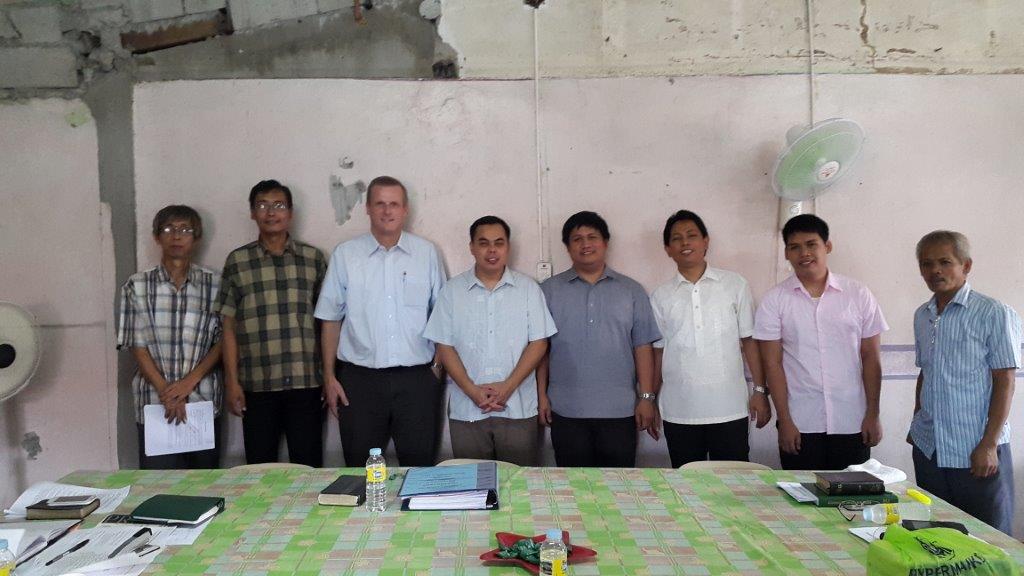 The Classis of the PRC in the Philippines met on Friday, June 12, 2015.  The meeting was held in the PRC in Bulacan.  This was the 5th meeting since the denomination's formation in 2014.  Rev. Flores led in opening devotions, and then Rev. Ibe chaired the meeting.

The business of Classis was mostly routine (reports of standing committees, church visitors, clerk, treasurer, etc.) and Classis was able to finish its work by noon.

The main actions were that Classis (1) adopted a constitution for Emeritus work, (2) adopted a constitution for Translation work, and (3) mandated its standing committee which is responsible, among other things, for contact with other churches to correspond with the Contact Committee of the PRCA with a view to establishing a sister church relationship.  It is encouraging to know of the PRCP's desire to work toward such a relationship.  We trust the standing committee is able to meet sometime in the near future to get that ball rolling.

The next meeting of the Classis is scheduled for Saturday, October 31 in the Berean PRC. 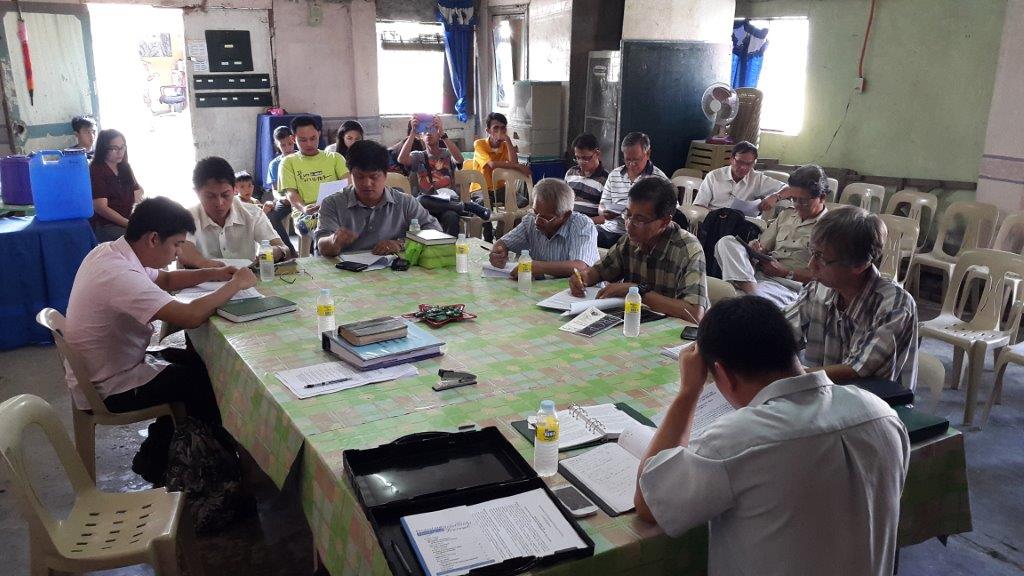 For more pictures from this meeting, visit Rev.D.Kleyn's blog. 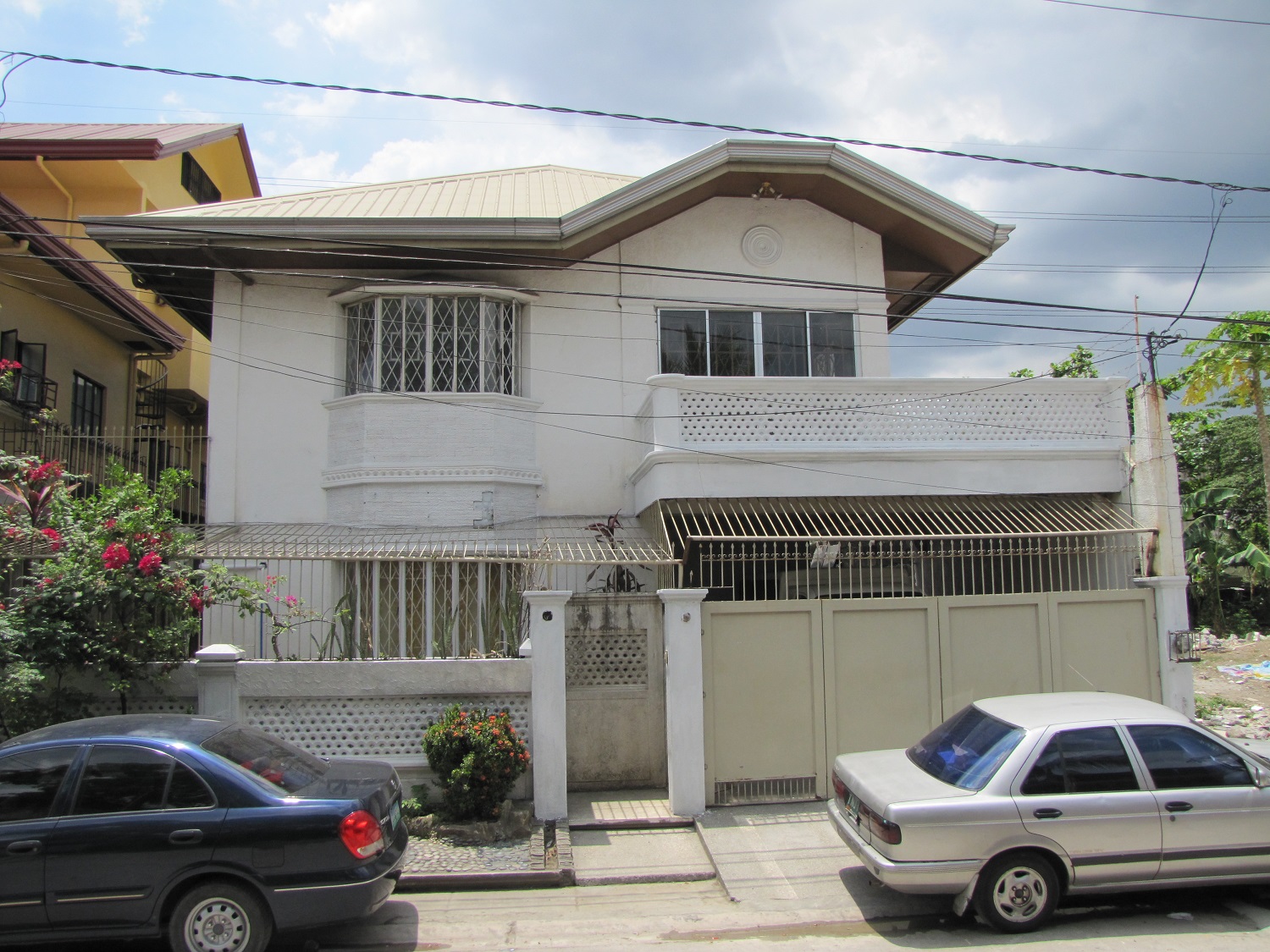 From the February 22, 2015 bulletin of the Provident Christian Church (Marikina, the Philippines), where missionary-pastor D.Kleyn preached this past Sunday,  we learn the following:

The regular Classis Meeting of the Protestant Reformed Churches in the Philippines (which meets 3 times a year) is scheduled for this week  Wednesday, February 25, beginning at 9:00 a.m., in the church building of the Berean PRC in Greenheights Subdivision, Mayamot, Antipolo. All are welcome to attend and observe the meeting.

Let's be sure to pray for the delegates as they conduct the business of the churches together in that part of the world.

Also, this note was placed in the same bulletin:

Next Sunday, Lord willing, Rev. R. Smit will be preaching for us. That will be his and his family’s last Sunday with us here in PCC.

Let's also be in prayer for the Smits as they conclude their life and labors in the Philippines and prepare to come to First PRC, Grand Rapids, MI where Rev.Smit recently accepted a call to serve as pastor.

Update: Rev.D.Kleyn sent this summary of the meeting and a few pictures, which we now add here.

The meeting was held yesterday (February 25) in the church building of the Berean PRC in Mayamot, Antipolo. Rev.D.Kleyn (who served as president of the previous classis) opened the meeting by leading the classis in devotions and a meditation on Psalm 87:2. Then Rev. Flores, by rotation, chaired the meeting of Classis. 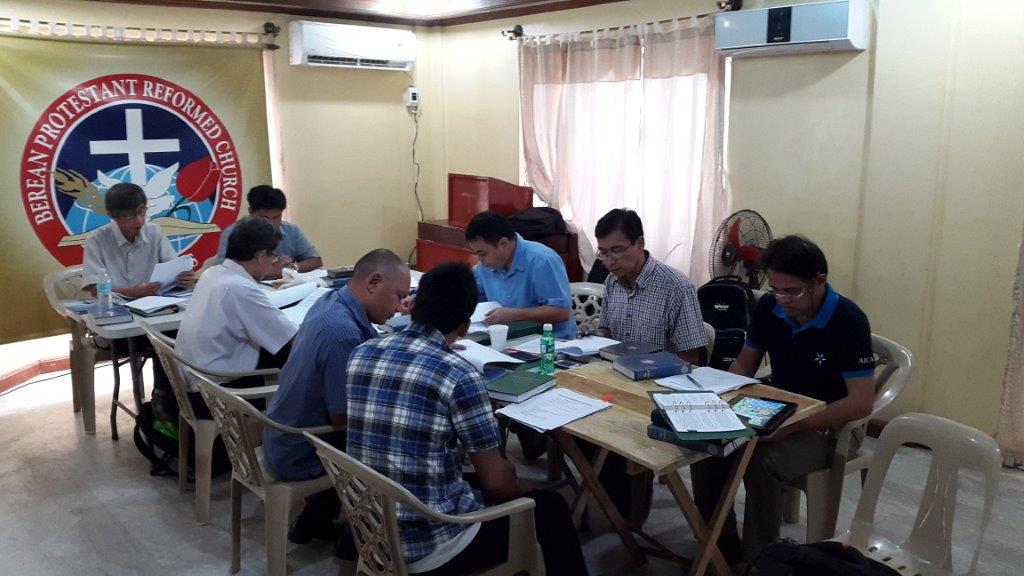 In addition to receiving reports from the clerk and treasurer and approving their work, the Classis received and treated reports from its two standing committees. The main content of these reports was that each committee presented constitutions to classis for its respective duties - i.e., constitutions for Contact Committee, Finance Committee, Seminary Student Training, etc.

The Classis also treated and approved the procedure that is to be used when churches request membership in the PRCP.  The classis then gave its approval for one of the standing committees to implement this procedure in treating the request of Maranatha PRC in Valenzuela to join the federation.

The classis began at 9:00 am and finished at approximately 1:00 pm.

This was the last classis meeting that Rev.R.Smit will attend, and he bade farewell to the classis and led in the closing prayer.  As many of the men of Classis mentioned, he will certainly be missed. 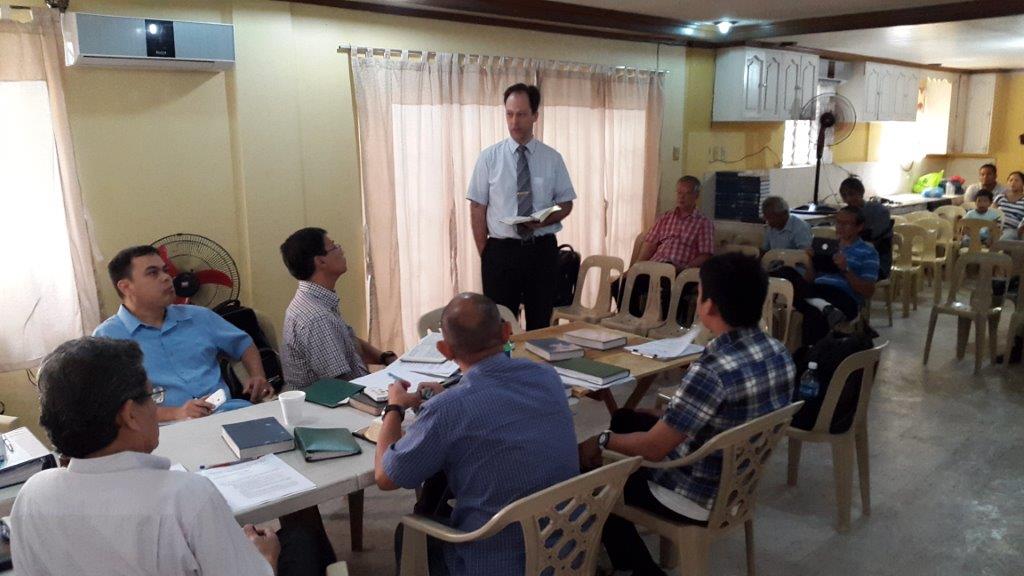 The next classis meeting is scheduled for June 12, the Lord willing, and will be hosted by the PRC in Bulacan.

The Berean PRC in Antipolo City, the Philippines plans to hold a Reformed Theology Conference this Tuesday, Dec. 30 at the Bantayog Memorial Center in Quezon City from 8:30 am to 4:30 pm.

Prof. David J. Engelsma (emeritus professor, PRC Seminary) will speak on the theme, “The Five Solas Of The Reformation.” Cost is P 150 per person. To reserve a spot, please contact Elder Rod Bongat at 0925-516-6424. 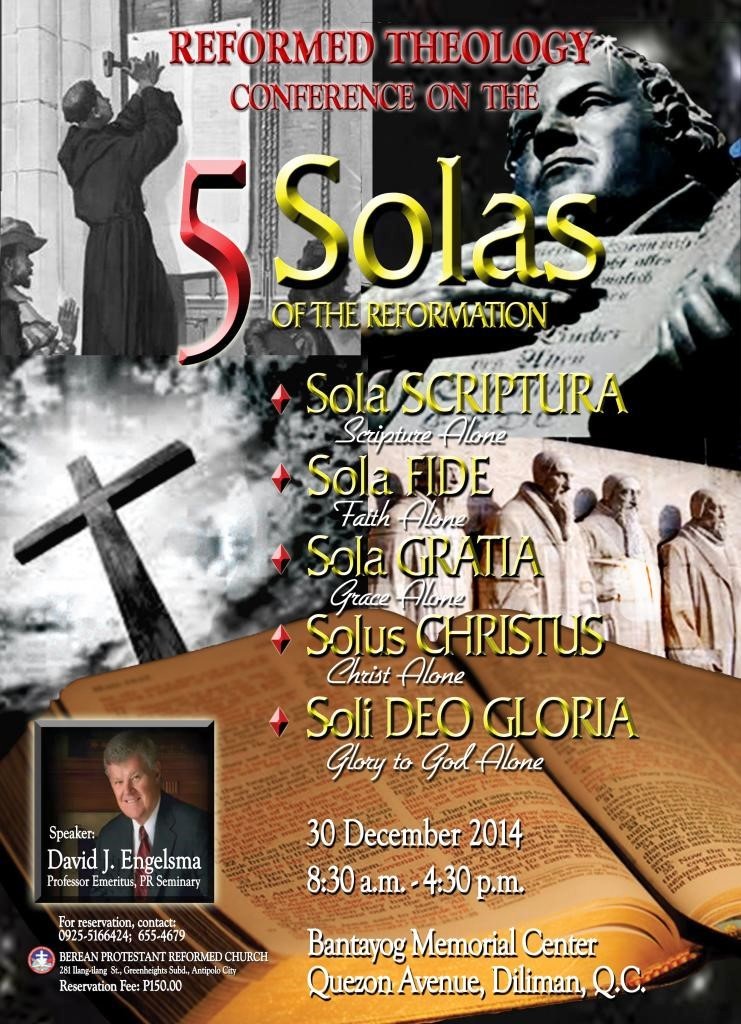 The Engelsmas arrived safely in the Philippines last night (Saturday, Dec.27) and Prof.Engelsma is preaching today in the Berean PRC.

*Update: On January 3, 2015 the Kleyns did a special post on their blog on the conference, with many pictures. You are encouraged to visit that post at the link provided here. Here are two pictures from that collection: 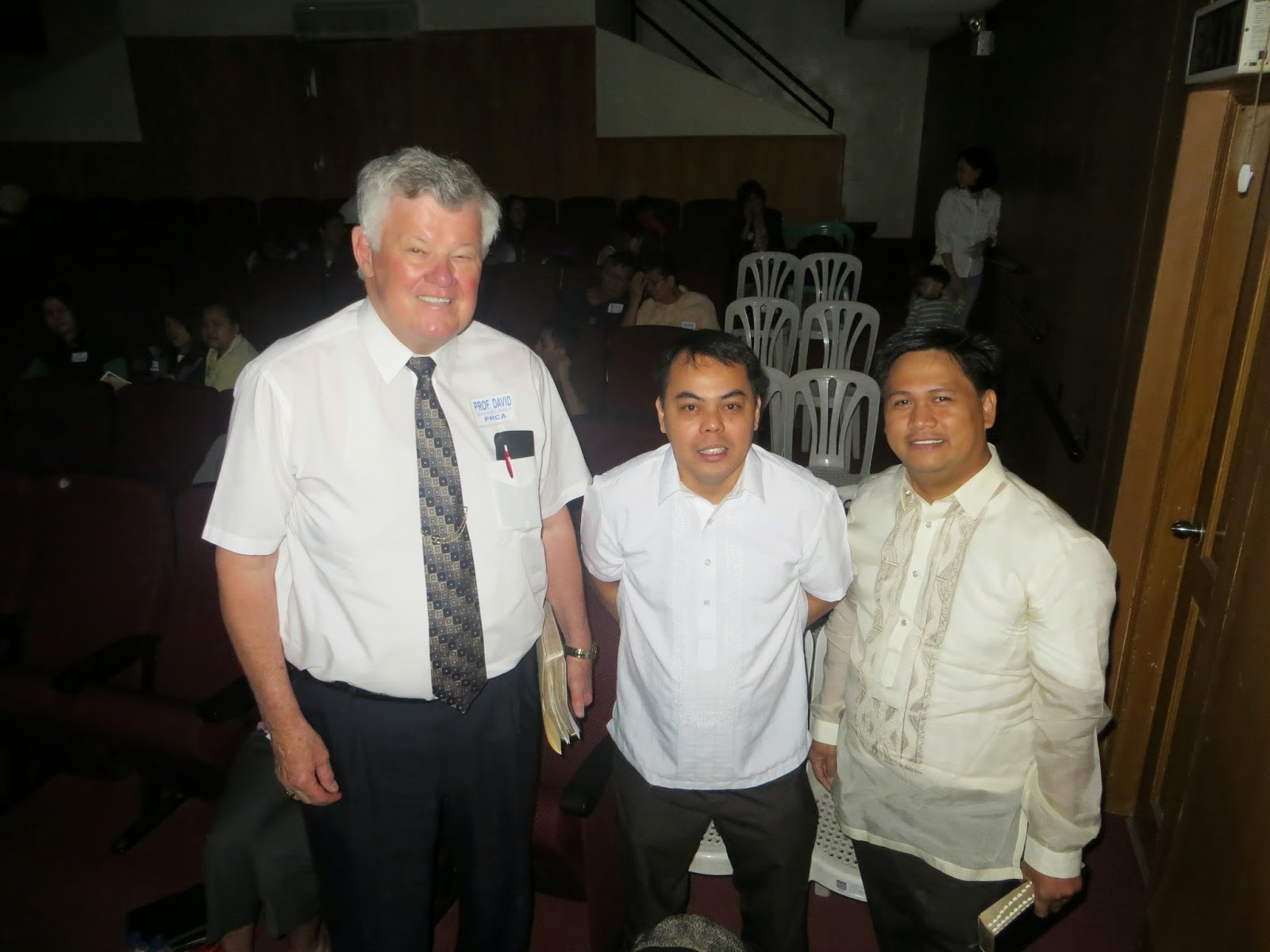 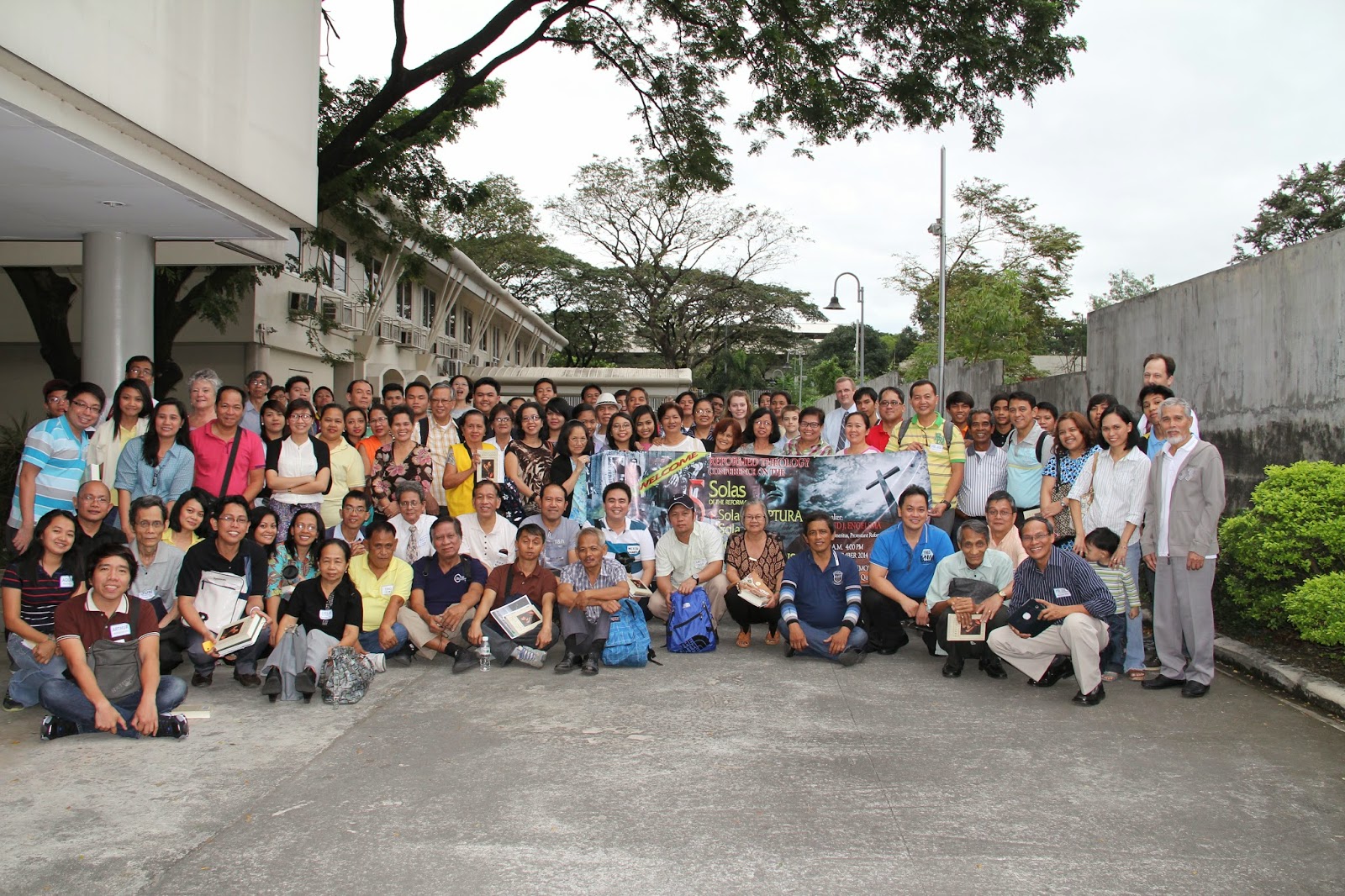 Further update: On January 9, 2015 Rev.D.Kleyn did a special post on the book selling part of the conference - exciting news! Here is a short note from that post along with a picture of Prof.D.Engelsma signing books:

In all we sold 270 books, more than double last year's sales! Thanks to the congregations of the PRC for the collections that make the sale and purchase of these books affordable!
I also promised an explanation of why Prof. Engelsma, the featured speaker at the conference, was not on the group picture. The reason was that many people wanted their books autographed by the author. :-) 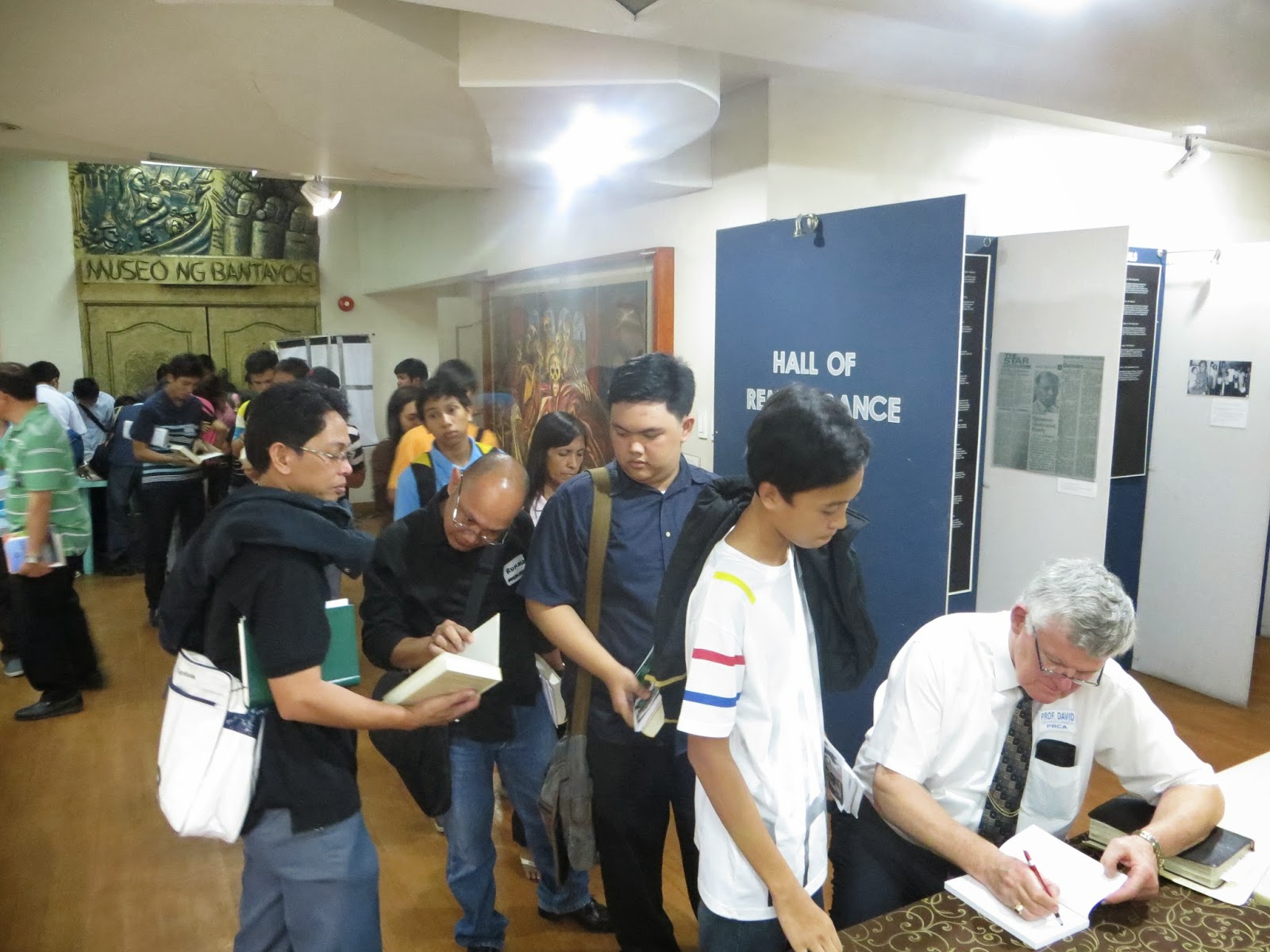 It was back in April of this year that the new federation of Protestant Reformed Churches in the Philippines was formed. The two congregations of Berean PRC (Manila) and First Reformed Church (Bulacan) committed to form a new denomination, agreeing in faith and practice on the basis of the Word of God, the Reformed creeds, and Church Order of Dordt. 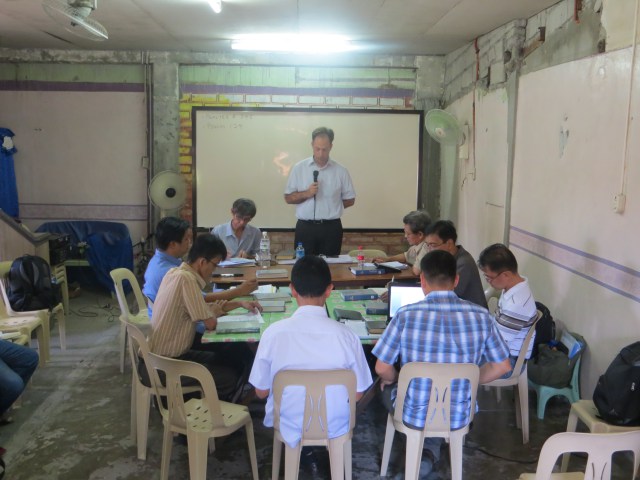 On October 31, Reformation Day, the churches held their third Classis meeting to conduct mutual church business. May God continue to bless this union, the meeting tomorrow, and the labors they perform together on behalf of the King of the church, Jesus Christ.

UPDATE: The picture above is from the Oct.31 meeting. You will also find a full report of this Classis meeting on the Philippines Mission Work blog.

*The Kleyns have also posted a feature on this Classis meeting on their blog, including many more pictures.

In other Philippine mission news, Missionary-pastor D.Kleyn recently reported on his and Rev.Smit's monthly trip to Bacolod and Sipalay. For more on this, visit the link on the Kleyn's blog. And be sure to sign up to receive the regular updates. Here is one picture from that post, as Rev.Kleyn prepares to lead the worship service and a regular member helps write the Psalter numbers on the board. 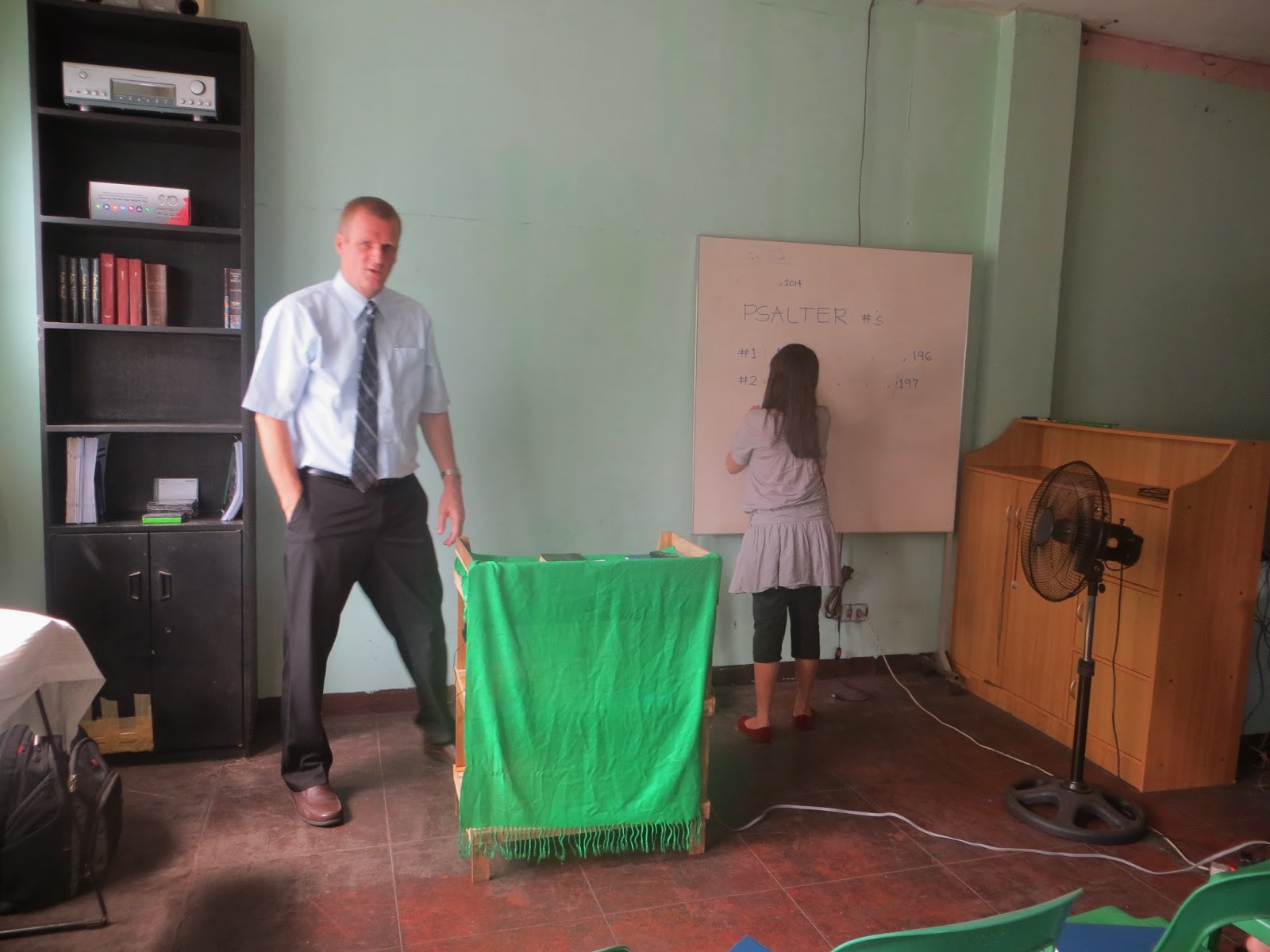