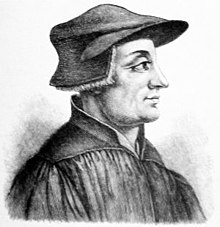 This article first appeared in the August 1, 1992 issue of the Standard Bearer and was written for the rubric "Cloud of Witnesses" by Prof. H. Hanko, professor of church history in the PRC Seminary.

We have come, in our discussion of important people in the history of the church, to the Reformation of the 16th century. If would be logical to begin with a couple of articles on Martin Luther and John Calvin. We have chosen not to do this, not only because both are well known to our readers, but also because many different and excellent biographies are available for reading. We intend, therefore, to write articles on lesser known men (and, perhaps, women) who were instrumental in bringing about the Reformation to which we are all the spiritual heirs.

In the midst of stunning Alpine beauty, in the Toggenburg Valley at Wildhaus, Ulrich Zwingli was born in a lowly shepherds cottage to the mayor of this small hamlet. He belonged to a large family - seven brothers (he was the third son) and two sisters. He was born seven weeks after Martin Luther, on January 1, 1484.

Zwingli received his education in the leading universities of Switzerland and Austria, but was throughout under the influence of the humanism of the Renaissance. This is important, for Zwingli's humanism was to be an influence in his theology even after his conversion, and during the years of his reformatory work. The Renaissance was a movement which had begun in Italy a couple of centuries earlier and was characterized by a revival of learning, a return to the study of ancient Greek and Roman classics, and an exaltation of man.

In Basel, Zwingli studied Latin grammar, music, and dialectics. In Bern he studied under Lupulus, the greatest classical scholar and poet in Switzerland and a leading humanist. In Vienna he studied scholastic philosophy, astronomy, physics, and the ancient classics. His education differed somewhat from that of Luther and was more nearly like the education which Calvin received; but all three reformers were highly educated men. One is reminded of how God often uses educated men in the church, for even Moses was "learned in all the wisdom of the Egyptians."

Returning to Basel, Zwingli studied and taught, acquiring his Master of Arts degree in 1506. Two events in Base1 helped to shape his future life: He was taught by Thomas Wyttenback, a man deeply interested in the reform of the church; and he met Leo Jud, who was to remain his friend and co-reformer for the rest of his life. Both of these men turned his thoughts to reform in the corrupt church of Rome.

Zwingli early showed remarkable ability as a musician, and in the course of his studies he learned to play with skill the lute, harp, violin, flute, dulcimer, and hunting horn. He made good use of this ability throughout his career and wrote a number of beautiful poems and songs.

In 1506 his work as minister began. He was ordained to the priesthood in Glaurus, but had to buy off a rival candidate for the sum of 100 guilders.

Some interesting things happened while Zwingli was in Glaurus. For one thing, he immersed himself in the pastoral ministry, preaching, teaching, doing pastoral work and caring for the spiritual needs of his flock in so far as he was able, for he was yet an unconverted man. For another thing, he spent a great deal of time in personal study, reading avidly the old Greek and Roman authors. To read the Greek authors, he taught himself Greek and became proficient in this language. His admiration for classical writers grew with his reading, and he developed the idea that the Holy Spirit must have operated beyond the boundaries of Palestine among the heathen philosophers, for their writings could only be explained in terms of the work of the Holy Spirit. In this respect he anticipated later views of the general gracious operations of the Holy Spirit among the heathen, taught by the defenders of common grace. Because of his vast learning and ability, he supervised the education of two of his brothers and of several of the noblest young men of Glaurus, who became firm friends and remained such through his years of reformatory work. During this period he also made three trips with Swiss soldiers into Italy and came to hate the Swiss practice of mercenary soldiers.2

In 1515 Zwingli moved to Einsiedeln, where he continued about three years. During his stay in Einsiedeln he gradually came to understand the evil of many Romish practices. Especially the corrupt practice of indulgences came to his attention when a huckster by the name of Samson tried to sell his indulgences in Switzerland. It is interesting that at least two years before Luther's attack against indulgences Zwingli was preaching against them and condemning them vehemently from the pulpit. In this respect, as well as in other matters, Zwingli anticipated Luther, taught the same things Luther taught, although he developed his ideas independently. 3

It was also in Einsiedeln that Zwingli made the acquaintance of the famous humanist, Erasmus, who, at about this time, published his first edition of the Greek New Testament. Zwingli was deeply attracted to Erasmus, visited him, became his friend, and invited Erasmus to Zurich in 1522, which invitation Erasmus declined. It is to Zwingli's credit that, while he agreed with Erasmus in many points, he repudiated Erasmus' semi-Pelagianism.

While Zwingli was in Glaurus and Einsiedeln, he fell into the sin of fornication. That this did not affect his standing in the church is only evidence of how common the practice was; but Zwingli later repented of it with great anguish of soul and lived with the burden of it all his life.

Zwingli never did free himself of his humanistic views, views which continued to influence his theology even when he became the reformer of Switzerland. All his studies had been from a humanistic viewpoint; he had read widely in classical literature; and his admiration for Erasmus all but guaranteed that humanism would play an important role in his thinking.

Zwingli's conversion was probably a gradual one which began while in Einsiedeln, but which came to full expression in Zurich, to which he was called in the latter part of 1518. There were several elements which played a role in his conversion. Increasingly, as he saw the need for reform in the church, he came to hate the Romish abuses which destroyed men's souls. As his studies turned more and more to Scripture, he, even before Luther, saw that Scripture alone had to be the authority for all the faith and life of the church. In fact, when he began his ministry in Zurich on January 1, 1519, on his 35th birthday, he began a systematic exposition of the Gospel according to Matthew. During the next four years of his ministry, he continued preaching systematically through the New Testament, going from Matthew to Acts, then to the Pauline and Catholic epistles, and then on to the other books, with the exception of Revelation. During the week he preached from the Psalms.

In 1520 the plague struck Zurich, carrying off 2,500 people, about 1/3 of the populace. Zwingli was untiring in ministering to the needs of his flock, until the plague struck him down. From it he almost died, and by it God made him a new man. A poem he wrote at the beginning of his illness aptly depicts his faith.

My strength and rock;

Lo, at the door

Once pierced for me,

And set me free.

Yet, if thy voice

In faith and hope

For I am Thine.

It was after his recovery that reform began in earnest. Once having become persuaded that Scripture was to be the only norm and standard of our life and faith, and of the life and faith of the church, reforms followed of themselves. But in Switzerland, reforms took place in a unique way. The pattern was: The reformers petitioned the magistracy to implement certain reforms; the magistracy called a public meeting or disputation to which were invited Roman Catholic theologians and reformers; both were required to defend their position on the matter at issue before the magistracy 4, which would then decide whether there forms were to be implemented. In these disputations it was common for the Council to rule that the debate had to be conducted on the basis of Scripture alone.

The first disputation was held on January 29, 1523 before a public audience of over 600 people. As would almost always be the case in future disputations, it was also true in Zurich that the reformers easily won their point, partly because their position was the only one grounded on Scripture, but partly too because the Romish Church had no significant and knowledgeable theologians who could hold their own in open debate with the reformers.

Victory followed upon victory, not only in Zurich, but also in other cantons of Switzerland where disputations were held. Lent was abandoned; clerical celibacy was declared unbiblical; the Bible was translated into the vernacular; images, pictures, and relics were removed from the churches; the churches were severed from the control of the papacy; the monasteries were dissolved; fasting was prohibited; the mass was replaced; the Lord's Supper was held at regular intervals5; discipline was established under the control of office bearers in the churches; biblical preaching was ordered in all the churches.

Zwingli himself married. Because of the times, he married secretly. For two years only his friends knew of his marriage. In April, 1524 he married publicly. His wife was Anna Reinhart, a widow with three children. From this marriage, four more children were added to the family. It is clear from Zwingli's letters that his home life was a happy one and that his wife was a faithful help to him in his years of work in the church.

1. He later attempted to teach himself Hebrew, and, while he succeeded in a measure, he never became as skilled in Hebrew as in Greek.

2. It was common in Switzerland for the men to hire themselves out to foreign armies. It is this practice which Zwingli came to hate, for the effects were spiritually demoralizing. The practice later became an issue in the struggles with Roman Catholicism, for the Roman Church supported the practice because of the vast revenues it brought into Switzerland, revenues some estimate as over $3,000,000.00 a year. From this practice dates the papal custom of having Swiss guards in the Vatican.

3. When Luther's writings later came to Zwingli's attention, Zwingli was impressed and encouraged because he had been teaching the same truths. A couple of examples are Luther's emphasis on the sole authority of Scripture, and the truth of sovereign predestination.

4. Which magistracy was generally a council of men. In the case of the first disputation in Zurich, the magistracy was the Little Council and the Large Council.