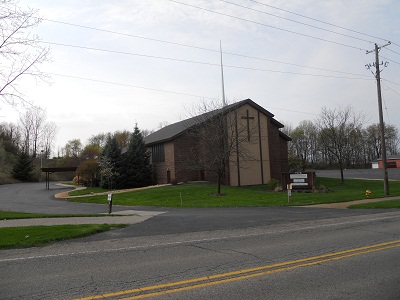 This will be the first time that there will be delegates from Pittsburgh PRC.

In addition to the usual business, the agenda has two other matters:

1. A report from Southwest PRC of its serving as the committee of Classis for the organization of Pittsburgh PRC.

Let us remember the delegates as they do the work of Christ's church today.

Classis East met in regular session on Wednesday, September 14, 2016 at the Southwest PRC.   Each church was represented by two delegates.  Rev. C. Haak served as the chairman for this session.  Welcome was given to the delegates from Pittsburgh PRC who were attending classis for the first time and to the delegates ad examina from Classis West who were present for the consideration of the request for emeritation from Rev. A. denHartog.

Southwest PRC requested approval for the emeritation of their pastor, Rev. Arie denHartog effective January 1, 2017.  Classis granted this approval as did the delegates ad examina from Classis West.  Rev. Haak spoke fitting words to Rev. denHartog on this occasion, thanking him for his able and faithful work as a minister of the gospel in our churches.

The Classical Committee reported on their work in approving the 2016 and 2017 subsidy requests from Pittsburgh and of their approval of the transfer of the ministerial credentials of Rev. W. Bruinsma from Southwest PRC to Pittsburgh PRC.

Classis granted classical appointments to Holland PRC.  Classis also appointed a search committee to bring nominations to the January, 2017 for the selection of a new Stated Clerk.  Classis also informed the Pittsburgh PRC that they did not need permission to ask the churches in Classis East and Classis West for collections for their Building Fund.