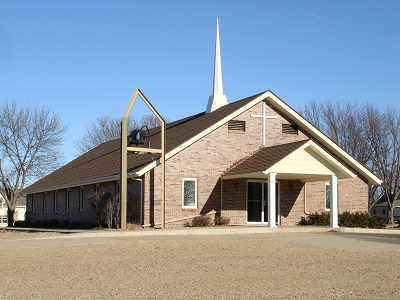 The next regular meeting of Classis West is set for Wednesday, March 4, 2015 at the Doon PRC in Doon, IA.

The agenda looks to be light. At this meeting Classis will be voting for its synodical delegates, functionaries, and committee members.

Pray that the men may be given traveling mercies as they make their way to NW Iowa and that these delegates may be given wisdom for the work the King of the church, Jesus Christ, has in store for them.

UPDATE: Below you may now find the Stated Clerk's public report of this meeting (also attached in pdf form):

On March 4, 2015, the thirty delegates to Classis West met in the Doon, IA PRC. The day dawned sunny, clear, cold, and windy - a typical winter morning on the eastern edge of the plains. Inside, the delegates enjoyed warm fellowship.

Rev. Erik Guichelaar opened the session by reading 1 Timothy 4:11-16, and giving a meditation on verse 16. The young pastor reminded the delegates of the need both to be diligent in our labors, and to be personal examples of godliness, assuring us from God’s Word that in this way we will enjoy God’s blessing on us personally and on our congregations. After devotions, Rev. R. Hanko took the chair and capably led the Classis through its work.

For the most part, this was a routine spring meeting. Classis approved the labors of its stated clerk, classical committee, church visitors, and reading sermon committee. It provided Peace PRC with classical appointments. Classis approved Edgerton’s request for subsidy for 2015, and approved subsidy requests for six churches for 2016. Since 1999, Edgerton has been able to subsidize its own General Fund by drawing annually from the interest and principal of a sizeable bequest. Edgerton informed Classis that, because the bequest could be completely gone in about 5 years, Edgerton thought it prudent to subsidize its General Fund partly from that bequest fund, and partly from denominational subsidy - which Classis granted. All subsidy requests will now be forwarded to Synod 2015 for final approval or disapproval.

First, Peace PRC informed Classis that its congregation has authorized its council to investigate buying property or existing buildings south of its current location, “most likely in Indiana.” Recognizing that the Illinois/Indiana border is the designated boundary line between Classis East and Classis West, Peace asked Classis to bring to Synod its request to be permitted to remain in Classis West, should Peace move across the classical boundary into Indiana. Classis forwarded this request to Synod, with its approval.

Second, the stated clerk informed Classis that he was nearly finished preparing an index of the decisions of Classis West, and desired advice from Classis regarding the printing, distributing, and updating of this index. Classis decided to permit every consistory in the denomination to receive a printed copy, and every minister in the denomination to receive a printed and/or electronic copy of this index. Because the index contains publicly known information, Classis faced the question whether to make the printed version available to any member of the denomination who requests it. Classis decided instead that members of the congregations may ask their consistory to use their copy, as the consistory is in a better position to judge why the member desires to use it. The stated clerk was then instructed to update and redistribute the electronic version of this index every year, and the printed version every ten years. However, every year the stated clerk must send those who receive the printed version a looseleaf sheet of cumulative updates.

Glancing through the minutes, I see that consistories have asked for advice regarding erasure or increase of censure at 7 of the last 11 meetings. This meeting was one of those four at which no consistories sought such advice.

Classis is scheduled to meet next on September 30 in Edgerton, MN.