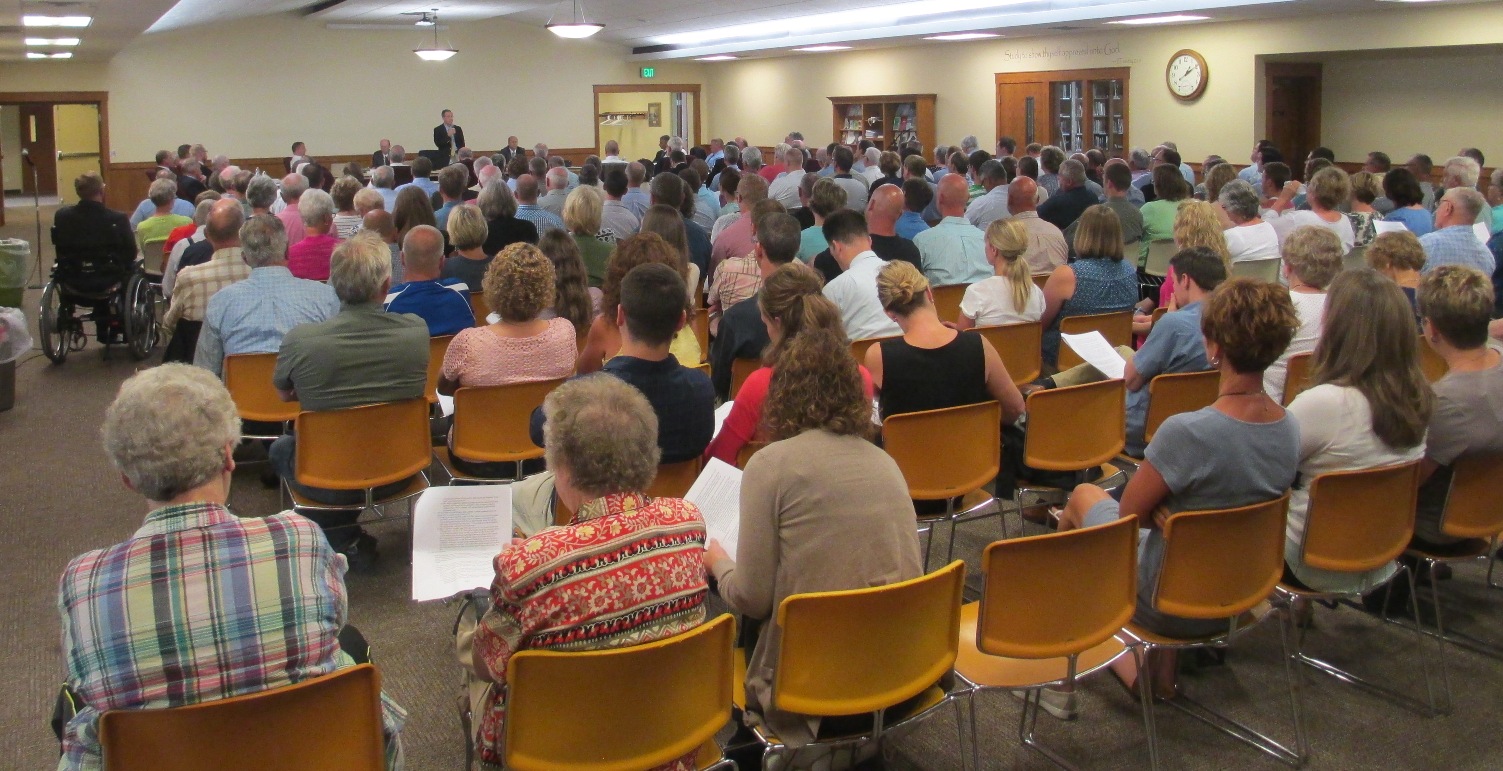 A large crowd gathered for the discussion of several protests and appeals relating to the doctrine of salvation by grace alone in Christ alone.

The following report from day six of the PRC Synod 2017 (Wednesday, June 21, 2017) is furnished by Rev. C. Spronk, second clerk. We take this opportunity to thank him for the daily reports.

Early in today’s session Rev. Doug Kuiper read a letter acknowledging the call to serve as professor of Church History and New Testament Theology and expressed his intention to answer the call no later than July 16, 2017.

Synod treated an appeal that contended that a consistory violated a members right to protest and appeal according to Article 31 of the Church Order when it placed that member under discipline after he filed a protest. Synod rejected this appeal and ruled that Article 31 of the church order was not violated.

Synod treated the advice of Committee IV regarding five protests. This committee started last week by bringing recommendations regarding the legality of six protests. One protest was declared illegal on the ground that the protestant is not a member of the PRCA. So today Committee IV brought advice about the substance of the other five protests.

All of the protests had to do with decisions of synod 2016 regarding a sermon on John 14:6. Synod 2016 decided not to sustain an appeal that contended that the sermon in question teaches a conditional covenant. Synod 2017 sustained three protests against that decision declaring that the sermon did make “our good works part of the “way” of the text.” Synod also declared that another protest did not need to be treated since it asked for a clarification of a decision that synod has now overturned. Synod also rejected the protest of the consistory (of the pastor who preached the sermon) that defended the sermon on John 14:6. Synod made some decisions to try to help the consistory and the pastor work through and implement these decisions, and appointed a committee to help them in all matters pertaining to this case.

Synod 2016 also took a decision not to sustain the decisions of a consistory and Classis East to charge a man with antinomianism. Synod 2017 decided not to sustain a protest against that decision today. However, it did note that some of the statements made by the individual in question “taken at face value, are contrary to Scripture and the Reformed Confessions.”

Sometime around 8:00 p.m. the minutes of the day were read and approved. The Vice-President, Rev. Bruinsma thanked Rev. Key for his capable leadership as chairman of Synod 2017. Rev. Key thanked the delegates for their cooperation. Prof. Russell Dykstra Closed with prayer.