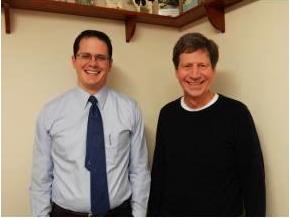 Rev. Nathan Decker (Trinity PRC) and Elder Pete VanDerSchaaf (Faith PRC) were this year's church visitors (9-16 January). Besides their official visitation with the CPRC Council (11 January), Rev. Decker did a fine job with both Sunday services, a Bible study on the purpose and role of our ecumenical and Reformed creeds, and a special lecture on “God's Beautiful Covenant of Grace” (13 January).

As well as advertising the speech by word of mouth, flyers through peoples' doors, a trailer after our Northern Ireland Reformed Witness Hour broadcast, notification through the Covenant Reformed News and Facebook, the Ballymena Guardian (7 January) and the Belfast News Letter (9 January) carried short articles. Even the latter, though only one paragraph and tucked away at the bottom of a piece about Christians in the Ulster rugby team, brought a lady visitor. The lecture was well attended and has received a lot of hits on-line (audio and video). A good number of books were sold.

While Rev. Decker was preparing his speech, Pete helped us collate and staple hundreds of copies of the new CPRC Book Catalogue (www.cprf.co.uk/bookstore/BookstoreCatalogue2016.pdf).

Our two American brethren also visited a number of our members in their homes. Their last evening with us was occupied with our annual congregational dinner. Rev. Martyn McGeown, Manuel Kuhs, and Chester Mansona of the Limerick Reformed Fellowship (LRF), as well as other friends of our congregation also joined us. Erik Prins (Trinity PRC) even flew in from Germany. The length to which single men will go for a good meal! William Graham, as always, gave a superb quiz, and Pete may be the only church visitor who has ever been on the winning team!

Our last lecture in the Round Chapel in Port Talbot in South Wales went very well (28 January). The subject, “Our Identity in Christ,” covered the loss of man in contemporary secular thought and presented the comfort of our union with the Lord Jesus.

David Hutchings, a friend in South Wales, has been promoting the speeches that Rev. McGeown and I give in Port Talbot. Through the special Facebook page he created for this purpose, three new contacts came to this lecture. Two other young men also attended for the first time. Twenty-two people were present—a good number for us. Some £200 worth of books and box sets of CDs and DVDs were sold, and a lot of free PR pamphlets were taken.

The speech was followed by a good and wide-ranging question time. Though I only touched on the subject in passing, “Our Identity in Christ” raised queries in many minds about the image of God, so I told the saints that it will be the subject of my next lecture in South Wales, DV.

The Belfast News Letter (29 January) published a letter I submitted on “Deformed Lutheranism and Unreformed Rome Commemorating the Reformation Together” (www.cprf.co.uk/articles/lutheransromereformation.html). We reprinted about 800 copies of Rev. Ron Hanko's very short but incisive pamphlet, “Some Further Objections to the Free Offer of the Gospel” ( www.cprf.co.uk/pamphlets/furtherobjectionstofreeoffer.htm ).

Our latest box set of CDs and DVDs contains 8 sermons on “The Interlude and the Seventh Trumpet” (Rev. 10-11). Since they cover the mighty angel astride land and sea, and the two witnesses, they have proven especially popular on YouTube.

The preaching of late is on the second table of the law (Heidelberg Catechism, Lord's Days 39-44) and the three chapters of one of the less-known, but significant, minor prophets: “Zephaniah and the Day of the Lord.” Recently, Tuesday morning classes on Hosea have covered Israel's kingship and God's covenant. Our Wednesday night class has been exploring two attributes of Christ's church: catholicity and holiness (www.cprf.co.uk/audio/belgicconfessionclass.htm). All are beautiful and rich subjects, for there is such a depth to God's Word!

The last couple of years have seen a number of large expenditures (for a church our size), most of which consisted of one-off items. Just when our bank account was running low, on top of the generous giving of the congregation, we received substantial donations from outside the church from saints in Northern Ireland, Australia, the U.S., and England. The Lord graciously provides for His people at the right time.

Since my last bimonthly letter, we have added 26 translations to our website ( www.cprf.co.uk/languages.htm ). These have involved believers in South America, Europe, Africa, Asia, and North America: (Brazilian) Portuguese 4 (including a very lengthy article, “The Image of God in Man: A Reformed Reassessment”), Hungarian 6 (Covenant Reformed News articles), Italian 3 (by Marco Barone), Afrikaans 5 (by Nic Grobler, a Reformed elder in South Africa), Indonesian 5 (including Rev. A. Brummel's pamphlet, “Bringing Forth Children in an Age of Selfishness”), and Korean 3 (by a Korean theological student in W. Michigan). 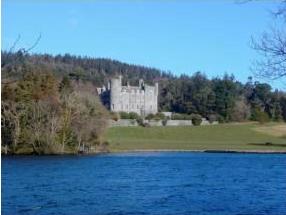 As you should have seen from the bulletins in the various Protestant Reformed Churches, the booking form for the 2016 British Reformed Fellowship (BRF) Conference is now available (http://brfconference.weebly.com/). You are warmly invited to join us at Castlewellan Castle, Northern Ireland for a week this summer (16-23 July). Prof. D. Engelsma and Rev. A. Lanning are our speakers on “Behold, I Come Quickly: The Reformed, Biblical Truth of the End.” Already we have a goodly number of people signed up or seriously considering coming.

May the Lord bless and keep you, your families and your churches in our ungodly world!