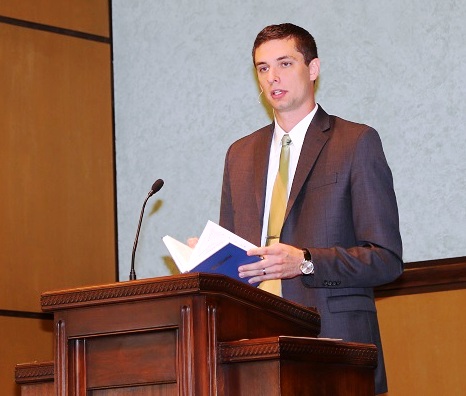 On Sunday morning, August 24, 2014, Cand. Joshua Engelsma announced that he was led by the Lord of the church to accept the call to Doon (IA) PRC. This also means that he was led to decline the calls from Faith PRC of Jenison, MI and First PRC, Grand Rapids, MI.

We rejoice with Josh and Courtney and family and with Doon PRC in God's provision, and pray that God will bless their plans as they prepare for his examination at Classis West on Sept.24 in Peace PRC, Lansing, IL.

The sermon he preaches as part of his examination is planned for the evening of September 23 at Peace.  The oral examination is scheduled for the following day, September 24, while Classis is in regular session. Upon his successful completion of the examination, Doon will be instructed by Classis West to proceed with his ordination and installation. In anticipation of such, the consistory hereby issues a call to worship to the congregation for the anticipated ordination and installation of Pastor-elect Joshua Engelsma into the office of Minister of God’s Word for the evening of Friday, October 3, 2014, at 7:00 pm. Prof. David Engelsma will conduct the service. Prof. Engelsma has also graciously agreed to preach for us the morning service of October 5. Pastor-elect Engelsma plans to preach his inaugural service for us the evening service of October 5.

Let us also remember to pray for Faith and First PRCs as they await their own undershepherd from the chief Shepherd, Jesus Christ.

Missionaries to the Philippines