In this newsletter I want to go back to happier times, before the current upheaval in church and state, although the happier times seem but distant memories now. In the last newsletter, 17 December 2019, I mentioned our plans to go to Australia.

The journey to Australia was long (bus trip from Limerick to Dublin, flight from Dublin to Amsterdam, second flight from Amsterdam to Singapore, and, finally, a third flight from Singapore to Brisbane). I am sorry that we could not visit the saints in Singapore; our layover was not long enough. Singapore airlines offer a wonderful service, by the way. Perhaps they need to do that in order to make such long flights bearable. Although I survived the flight to Singapore, my heart sank when realization hit that we had another flight of over eight hours to Brisbane. Nevertheless, we arrived safely, for which we thank the Lord.

Dear friends, (Pastor) David and Ruth Torlach (Brisbane Evangelical Presbyterian Church), whom I have known from my seminary days, were our gracious hosts in Australia. To see them again was a happy reunion: the only regret is that we did not see their children, who live in Tassie (Tasmania). Seth, with his wife Megan, was the exception: they came to Brisbane to attend the Youth Camp, and it was wonderful to see Seth again and meet his wife. David and Ruth welcomed us warmly and made us feel right at home the entire time that we were there. 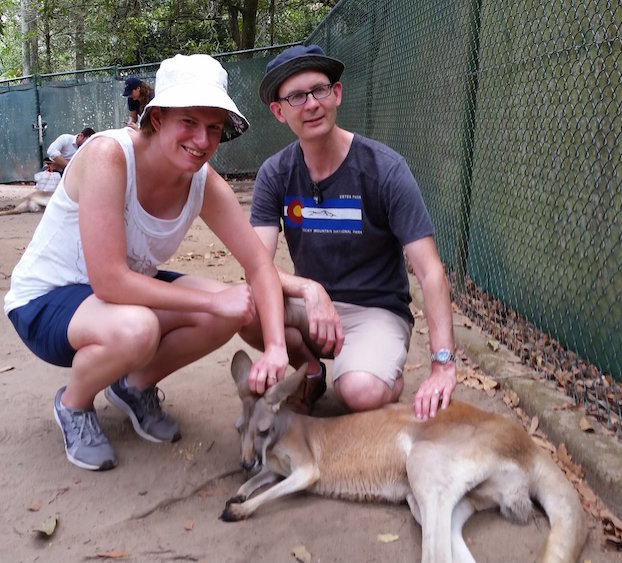 Since David and I are both in the ministry and since we had not seen one another (except once) since our seminary days, we had a lot to talk about. I was greatly encouraged to be able to discuss the joys and sorrows of the ministry with a likeminded colleague. Ruth and Larisa also enjoyed chatting about the realities of being the wives of pastors. I discovered quite quickly that ministers the world over face the same basic issues; churches the world over have the same encouragements and discouragements; and the devil attacks churches across the world in very similar ways. How good it was to see the Lord’s work in different parts of His vineyard!

The main reason for our visit was the EPC Youth Camp, which is held every two years, and is hosted and organized by the youth of the different EPC congregations. This year the Brisbane youth hosted the camp in Minden, Queensland. The EPC youth camp is a much smaller and more intimate version of the Protestant Reformed YPC with about forty young people in attendance, with ages ranging from thirteen to the mid-twenties. They were truly a beautiful group of godly, spiritually mature, enthusiastic, servant-hearted, and fun-loving young people! Ruth Torlach and her sisterin-law, Sue Higgs, were the caterers, while the young people led devotions, served the food, and cleaned up afterwards. There was a lot of time for team games, swimming (when the temperatures hit the mid 30’s Celsius or mid 90’s Fahrenheit a pool is a must!), chatting, fellowship, and even wildlife exploration. Larisa and I even got an air-conditioned room. Speaking of wildlife, contrary to reports, not all the fabulous Australian fauna is deadly. One boy brought me an Australian tree frog, while another teenage boy caught a possum, which he cornered in a cupboard, and David showed me a rhinoceros beetle.

My role was camp speaker. Over the seven days of the camp I gave seven speeches/sermons on the Armour of God from Ephesians 6, instruction that the young people enthusiastically received. On Thursday, word got out that I planned a test to see how much the young people had learned and understood, so the young people started cramming for the quiz that I prepared. They took the test very seriously, huddling in corners, poring over their notes, and begging me for clues. The test was “Military Graduation Exercises,” in which the teams had to answer questions on the Armour of God to demonstrate that they were ready to deploy the various pieces of armour described in the speeches. The exam ended with a sword drill to test their ability to find passages in the Scriptures. None of the young people had any cause for embarrassment, for they all performed extremely well and duly graduated as “Christian soldiers.”

Another highlight of the visit to Australia was the privilege afforded to me to preach in Brisbane EPC for two consecutive Sundays. It was wonderful to meet the congregation, lead them in worship, and fellowship in their homes. The EPC uses the same Psalter as the Limerick Reformed Fellowship, the Scottish Metrical Version. Their order of worship is also almost identical to ours in Limerick, so I felt quite at home. Since December/January is the Australian summer, the other church activities (Bible studies, catechism, young people’s meetings, etc.) were not taking place, which gave the Torlachs lots of time to show us the sights of Brisbane and beyond. 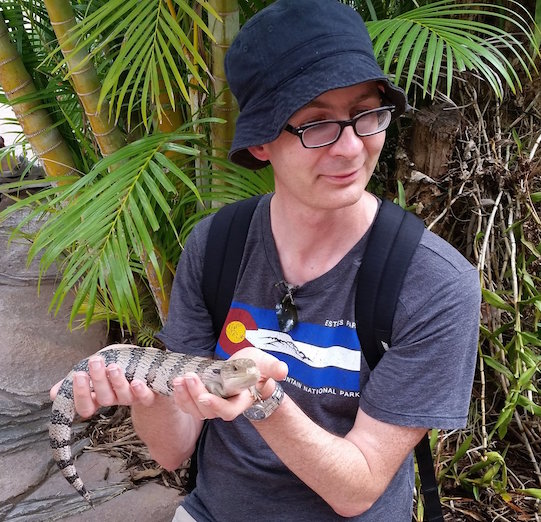 When we arrived at the EPC worship place (Mount Ommaney Special School) I was surprised and fascinated to see a large lizard, an Australian water dragon, about the size of a small dog, sitting on the pathway. I was informed that such lizards are common: they run around freely and they are quite familiar with humans. I saw many such lizards in Australia (including geckos that gathered around a light outside the Torlachs’ house), and on one occasion David caught a lizard and gave it to me to hold it. In addition, we saw koalas, kangaroos, parrots, bats, kookaburras, and cane toads. The latter are a pest species, but I still found them interesting. We swam in the ocean, visited a mountain forest retreat (O’Reilly’s), explored the city of Brisbane, and visited the
famous Australia Zoo to see crocodiles and many other creatures.

All in all it was a wonderful trip, which gave us greater appreciation for the saints in Australia. It was difficult to bid the Torlachs farewell, but we had people in Limerick eagerly awaiting our return. In the next newsletter, I will get back to reporting about Limerick, which, as I write, is under a “lockdown” order, so that we have not met for public worship since March 22. Therefore, as a lot of you are doing, we have had to be creative to get the Word out.