Dear members of the Protestant Reformed Churches and our sister churches,

It is a rainy Saturday morning here in Antipolo City, Philippines. “Winter” is about over and “summer” is about to begin. “Winter” is a relative term, of course. The temperature rose to about 80 degrees during the day and dropped into the 70s at night. The Filipinos thought it felt rather cold. We thought it felt rather nice. Soon, however, during the Philippine summer, the temperature could rise into the upper 90s (April-May). Later the rainy season will come (June-October). Adjusting to a tropical climate is just one of the many changes we, the Holsteges, are experiencing as we settle into life here in the Philippines.

We said farewell to the parsonage in Holland, MI on December 26 and moved in with my parents, Jim and Kathi Holstege, for two weeks. On January 10, in the dark of night, we flew out of Chicago – my wife Leah, our four children Gabriel, Kirsten, Kiley, and Charity, my wife’s parents Lou and Cheryl Regnerus, and I. We arrived in Manila on January 12. Rev. and Sharon Kleyn were at the airport to pick us up and help us move into our new home. I want to pause here and thank both of our parents for all of their tremendous help and support in our move to the Philippines. 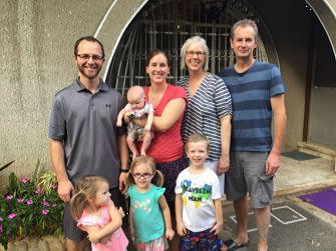 Leah’s parents, Lou and Cheryl Regnerus, and us (picture to left)

Some other adjustments include getting used to using the right electrical outlet, whether the 220 or 110 volt (we and our kids have already zapped three or four devices to death); getting used to mopping three times per week, but never needing to vacuum, since we have no carpet; learning how to get rid of red ants in the kitchen, how to maneuver delicately through busy Manila traffic, how to handle our finances and pay bills, and how to get our groceries.

Still other adjustments have to do with learning to live in a very different culture from our own: how to communicate effectively; how to avoid cultural blunders; how to show cultural humility and respect; in short, how to become all things to all men that we might by all means save some (I Cor. 9:22).

One way we hope to draw nearer to the Filipino saints is by learning their mother tongue. I began studying Tagalog in the U.S. Then, on February 28, Leah and I began Tagalog classes in Quezon City, a part of Metro Manila. Ready for your first Tagalog lesson? Magandang umaga po. Kumusta po kayo? Mabuti naman ako. That is, “Good morning, sir. How are you, sir? I am fine.” Filipinos consider it important to use the word “po” whenever addressing someone who is older than them or in a position of respect. Lord willing, our studies will yield the good fruit of the ability to converse, and for me possibly to preach, in Tagalog.

OUR VISITORS
First, I should mention two visitors who were here before our move. Prof. Russ Dykstra and Rev. Garry Eriks visited the Philippines as a delegation from the Contact Committee in mid-December. The brothers met with leaders in the Protestant Reformed Churches in the Philippines (PRCP) to discuss the formation of a sister-church relationship between our two denominations. Although we were not here yet, I was told that the meetings went very well.

Second, on January 28 four visitors from our sister church in Singapore (CERC) arrived: Beng Young and Kim Lim visited us with their two daughters Cheryl and Bernice. They stayed with the Kleyns over the weekend that they were here. We have gotten to know them over the years and enjoyed getting reacquainted with them. Cheryl and Bernice
did a great job entertaining our kids too! They babysat for us one morning so that we could get groceries (we usually do that together because Leah is not quite ready to drive on her own).

Third, from February 4-14 we had three more visitors: the annual delegation from Doon PRC and the Foreign Mission Committee (FMC). Elder Alan De Boer came from Doon, and Rev. Allen Brummel with his wife Crysta from the FMC. Mr. De Boer stayed with us, and the Brummels with the Kleyns. Their visit was a great encouragement to us. Rev. Kleyn and I met with the two brothers to discuss our work and plans. We also joined them in various meetings with the consistories and committees of the PRCP. Moreover, the two men conducted family visitation with each of our families. All in all, we the Holsteges enjoyed getting to know them on a more personal level, and we appreciated their many words of encouragement and guidance regarding the work.

We cordially invite others of you to visit us sometime in the future, if the Lord makes the way possible for you. I am sure, as Mr. De Boer told us, you will never forget such an experience. You will receive a new appreciation for the catholicity of the church and the great commission to go into all nations and preach the gospel.

On January 22, I preached for the first time in the Philippines since our move. Since I will be focusing on Provident Christian Church (PCC), not yet a part of the PRCP, I preached an inaugural sermon to them on I Cor. 2:1-5 – “Paul’s Preaching: A Model to Follow.” I emphasized that my goal, following Paul, is to preach Jesus Christ and Him crucified, nothing more, nothing less. I also began preaching the Heidelberg Catechism to them and have covered Lord’s Days 27-32 so far. With me taking over most of the preaching at Provident, Rev. Kleyn will be preaching in the three churches of the PRCP and, Lord willing, in the churches in Southern Negros Occidental (SNO).

On January 26, I took over the Thursday night doctrine class at Provident. Rev. Kleyn began teaching the Canons of Dordt to them in December and covered Head I, Art. 1-7. I have taught Art. 8-16 so far on the precious truth of sovereign and eternal election and the truth of reprobation which “peculiarly tends to illustrate and recommend to us the eternal and unmerited grace of election.” On February 9, Rev. Allen Brummel gave a lecture to this Thursday night group on “Bringing Forth Children in a Selfish Age.” Although I stayed home with our children, the others who were there said the speech was well attended and well received. Thanks to Rev. Brummel for his help with preaching and teaching while he was here.

Finally, Rev. Kleyn and I attended the Classis meeting of the PRCP on Saturday, February 25. Rev. John Flores was the chairman of the meeting, by rotation (second from the right in the front row below). Classis discussed matters pertaining to missions on the island of Leyte, translation of Reformed literature into Tagalog, and finances, among others. Classis gave me, as a new missionary from the PRCA, the right to speak on the floor as an advisor, for which I thanked them (Learn how to say thank you in Tagalog: “Salamat po!”). 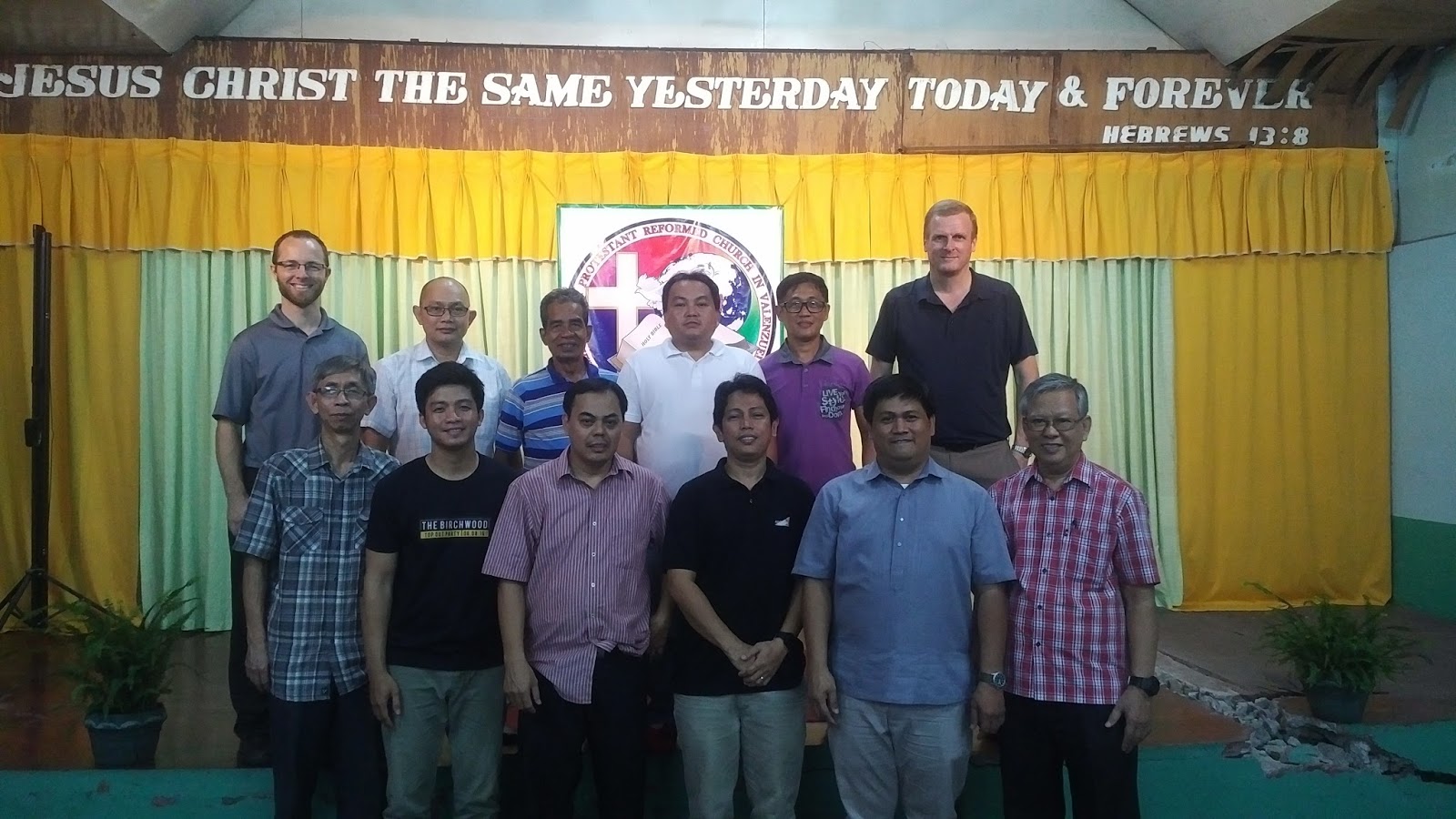 Classis meeting of the PRCP on February 25 (picture to left)

That is all to report for now. May God’s richest blessings be upon you all in Christ! And pray for us!