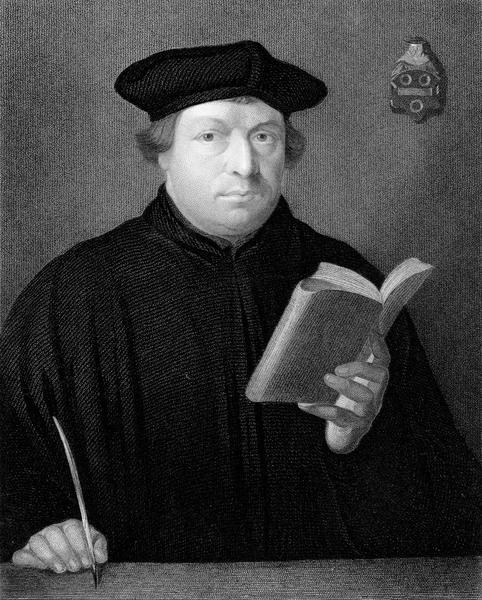 Prof. Herman Hanko is professor of Church History and New Testament in the Protestant Reformed Seminary.

But the institute of the church was corrupt and the saints of God had no place to go with their children to be nourished by the Bread of Life. And gradually, under Rome's terrible pressures, the church became more difficult to find.

God has His own way and His own time of doing that which needs to be done to preserve His church. Applicable to the church as well as to creation is the old adage: "It is always darkest just before dawn." Darkness grew deeper in Europe under Rome's heavy hand; the dawn was about to break. It broke with the coming of an insignificant monk out of Saxony in Germany when hope for reformation was gone. It broke from an unexpected source and in a surprising place. It is the story of one of the greatest works of God in the church since the time of the apostles. It is doubtful whether such a story shall again unfold until Christ returns at the end of time.

The Reformation in Luther's Soul

From our earthly and human perspective it seems as if God is never in a hurry. He seems to take His time about things which appear to us to be so crucial that any delay is disastrous. So it was with Luther.

In the latter part of the 15th century, the situation in Europe seemed to be so bad that, if God did not do something very shortly, it would be too late and the church would be forever gone from the earth. Reformation had to take place or reformation would never take place.

But, although when the reformation did come it came as the mighty surge of a tidal wave which engulfed Europe, it after all came very slowly and scarcely noticed. It came as a still small voice in the soul of Martin Luther.

Martin Luther was born November 10, 1483 in Eisleben, Prussia, in Saxony of Germany. His parents were rather poor, but honest and industrious, pious members of the Romish church. And Luther was brought up under the strict discipline and superstition of the church. He received his early education in Mansfeld, Magdeburg, and Eisenach. Because his parents were unable to support him, he sang to earn a bit of money and was helped by Ursula Cotta, wife of one of the wealthy merchants in Eisenach. His upbringing was the rough training of the peasantry and he bore the indelible marks of his upbringing all his life. It made him a man of the people.

At 18, in 1501, he entered the university of Erfurt to study scholastic thought, logic, metaphysics, rhetoric, and physics — the traditional studies of his time. Because the Renaissance had entered German universities too, he also studied the Latin classics and developed in poetry and music. Probably at 20 years of age he saw a complete Bible for the first time, at which time began also a struggle in Luther's soul which, created by God, was the burden of his own personal salvation. In 1502 he graduated from the university with an A.B. degree and three years later obtained an A.M., roughly equivalent to a Ph.D. today. Law was his main concern, because it was his father's wish that he devote himself to what was one of the most promising careers in Roman Catholic Europe.

But God had other plans. Two events brought Luther into a monastery: one was the sudden death of a friend either killed in a duel or struck by lightning; the other was a terrible thunderstorm in which he thought he would die and pleaded with St. Anne to spare him, promising, if spared, to become a monk. He was spared, and a monk he became — on July 16, 1505.

He wanted to be a monk because he thought of the convent as the way to bring some peace to his fear-filled soul — peace which came from the assurance of God's love. God put him in a monastery so that he could learn the utter uselessness of every prescription Rome offered to attain this peace. But Rome's prescriptions were no prescriptions at all, because they were based on what man had to do.

And, indeed, in the monastery he tried it all. As he himself put it, he out-monked all the monks. He mistreated himself so badly with various works of penance that he harmed his health. He confessed sins to his superior so often and in such detail that he was told finally either to commit some sin worth confessing or to quit bothering a busy man with silly little things.

God sent him some help in the monastery, perhaps sufficient to keep Luther sane, although not sufficient as yet to bring Luther peace. The help came from Johann von Staupitz, the Vicar-general of the monastery, one who because of his mystical leanings knew more about salvation than the whole Romish church, but who never left Rome for all that. von Staupitz directed Luther to Scripture, turned Luther's thoughts to the forgiveness of sins in the cross, and planted the seeds of the priesthood in Luther's soul. In 1511, in one of Luther's periods of black despair, von Staupitz, while sitting with Luther under a pear tree in the garden of the monastery, told Luther to prepare himself for preaching by becoming a Doctor of Theology. Luther's response was: "Your honor, Mr. Staupitz, you will deprive me of my life." Only half in jest, Staupitz replied: "Quite all right. God has plenty of work for clever men to do in heaven."

The time spent in the monastery was necessary for Luther to realize that the theology of the Romish church was wrong because it taught salvation by works. And the works which God required could never be performed by man. Luther himself was plagued with the thought that one either did not do enough good works, or the works which he did were not sufficiently good to earn his salvation. And because no works could earn salvation, the peace and joy of salvation could not be found in Romish prescriptions. Luther needed to learn this lesson in the school of the Holy Spirit, because no reformation would ever be possible without learning it.

Luther entered the priesthood and said his first mass on May 2, 1507. But he continued his studies towards a doctorate in theology which, when completed, opened the door for him to become professor in the University of Wittenburg. In the winter of 1512 the Reverend Doctor Martin Luther began his teaching with lecturing on the Psalms, on Romans, on Galatians, on Hebrews, and again on the Psalms. He saw these studies as crucial and later said: "In the course of this teaching, the papacy slipped away from me."

But in what later has become known as Luther's "tower experience" he suddenly came to understand that the phrase, "the righteousness of God," did not refer to God's hatred of sin rooted in His own perfection, but meant that God imputed righteousness to the sinner without works and only because of the merits of Christ. It was a righteousness freely given to undeserving sinners by faith. It seemed to him, Luther later said in describing this event, that the gates of heaven themselves were opened before him. Suddenly his awful sense of guilt and unworthiness fell away; his desperate attempts to achieve peace with God through his labors seemed stupid and useless; all his monkish rituals were exercises in futility. He was without any sin, not because he did not sin, but because Christ's righteousness was freely given. He was, as he described it, righteous and a sinner at the same time. This brought peace, even in the struggle with sin.

The full implications of this theological "breakthrough" did not dawn immediately on Luther. Once having seen this great light, he now had to re-read and re-study the Psalms and Paul, for, understanding that salvation through imputed righteousness lay at the heart of Scripture, he had to look again at it all from the viewpoint of this "heart."

The reformation had been, by God's grace, completed in Luther's soul. It was now time for the work to begin in the church at large. God had readied the man He was to use, and even if Luther did not know it, the people of God were now to be led out of the Egypt of Rome's church into the Canaan of the gospel. And Luther was appointed the Moses.

The work began when the monk Tetzel decided to hawk his indulgences in Saxony of Germany, where the news of it came to Luther's attention. Luther, convinced in his own soul of the evil of indulgences, decided to open the subject to debate among the monks of the Augustinian Order of which he was a part. To invite others to the debate, he attached 95 theses to the chapel door of the church of Wittenburg, as notice, to anyone wishing to participate, what the subject of the debate would be.

It became evident from this time on that the reformation was indeed the work of God, not the work of Luther. It had been God's work in Luther's soul, but it continued to be God's work as well. Luther himself, in describing the progress of the Reformation, was later to say:

The first thing I ask is that people should not make use of my name, and should not call themselves Lutherans but Christians. What is Luther? The teaching is not mine. Nor was I crucified for anyone.... How did I, poor stinking bag of maggots that I am, come to the point where people call the children of Christ by my evil name?

Or a bit later, in a sermon:

I simply taught, preached, wrote God's Word; otherwise I did nothing. And then, while I slept, or drank Wittenburg beer with my Philip and my Amsdorf, the Word so greatly weakened the papacy that never a prince or emperor did such damage to it. I did nothing. The Word did it all.

This conviction of Luther that what happened was God's work was apparent at the time of the theses. Luther, rather innocently, wanted a general discussion. God took the theses and through the marvel of the printing press caused them to be distributed through the whole of Europe, and they shook Europe to its foundations. The theses were the germ of the gospel of salvation in Christ alone, a truth for which Europe hungered.