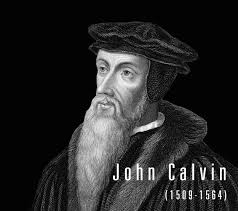 Prof. H.Hanko is professor of Church History and New Testament in the Protestant Reformed Seminary.

When Karl Barth was preparing a series of lectures on John Calvin, he wrote to a friend:

Calvin is a cataract...I lack completely the means, the suction cups, even to assimilate this phenomenon, not to speak of presenting it adequately. What I receive is only a thin little stream and what I can then give out again is only a yet thinner extract of this little stream. I could gladly and profitably set myself down and spend all the rest of my life just with Calvin.

No one can possibly question the assertion that John Calvin is the greatest reformer of all time. More books have been written about him and his theology than about any other figure in the history of the church. All those who in the last 450 years have cherished the doctrines of sovereign grace have claimed Calvin as their spiritual father. And all who confess a theology thoroughly biblical and embodied in all the great creeds of the 16th and 17th centuries call their theology Calvinism. Other than the sacred Scriptures themselves, there are few if any books that have exerted the influence on subsequent centuries that Calvin's Institutes of the Christian Religion has had down to the present.

Yet, Calvin never, after he began his life's work, strayed far from Geneva, a relatively small city in French Switzerland. It was here he came on a stormy night; it was here he stayed, frightened by the threat of William Farel; it was here he did all his work. But now his work has circled the globe. The only explanation for it can be that God, through Calvin, brought reformation to His beleaguered church.

The part of Switzerland which is of interest to us was called French Switzerland because it bordered on France and the French language was spoken there. It was composed of the cantons of Geneva, Vaud, and Neuchatel. In the canton of Geneva was the city by the same name on the shore of a lake also called Geneva.

The Reformation had come not only to Germany, but had spread also to other parts of Europe. In Switzerland Zwingli had done the majority of the work, and in Geneva the way for Calvin had been prepared by the fiery and radical Reformer, William Farel.

Berne, to the north of Neuchatel, had joined the Reformation in 1528 and sent ministers into French Switzerland to preach the gospel there. Fare1 was the leader, and a more powerful figure could scarcely be found.

Farel's entire work was carried on with struggle and in turmoil, and in 1532 Fare1 was driven from the city. In 1534 he returned and through disputations and preaching won a bit of breathing room for the Protestants who were converted under his preaching. But in his favor was the fact that, because Geneva was so small, it was technically under the rule of Basel, and Base1 supported the Reformation. Gradually the priests, monks, and nuns began to leave the-city, and the Reformation was officially established in 1535 and 1536. But the city remained the heir of Roman Catholicism: a place of frightening moral conditions.

Calvin was born on July 10, 1509 in Noyon, France, 26 years after Luther's birth. While Luther was born in a part of the church where piety and religion were emphasized, Calvin was born into a part of the church which treasured education and culture. Little is known of Calvin's mother. His father was apostolic secretary to the bishop of Noyon, but fell into financial difficulties, became an embarrassment to the church, and was excommunicated.

Almost from the start Calvin was destined for the clergy, and in his 12th year he received part of the revenue from a chaplaincy which supported him in his studies. His studies, while in various schools, were mainly in Paris. Perhaps they all can best be summed up by the following description of his work in the College de Montaigu,

a famous school known for its stern discipline and its bad food. Erasmus, who studied here a few years before Calvin, later complained of the spoiled eggs he was forced to eat in the refectory. Calvin's lifelong problems with indigestion and insomnia probably derived from the rigid fare and his penchant for burning the midnight oil at Montaigu. Later legend has it that during these years, his fellow students awarded Calvin the nickname of "the accusative case." While this is not true, Beza, in his adoring biography, acknowledged that the young scholar was indeed "a strict censor of every thing vicious in his companions." While his classmates were cavorting in the streets or running off to wild parties, Calvin was busied with the niceties of nominalist logic or the quaestiones of scholastic theology.

All in all, Calvin received one of the best educations in the humanities available at that time and emerged from his education a thorough-going humanist. He had made theology the object of his studies, switched to law, and then returned to theology. In 1532, still seemingly untouched by grace, he wrote a commentary on an essay by that old pagan Roman Seneca entitled "On Mercy."

But God had begun His work in Calvin. Already the first influences of any beneficial sort were from two professors, one named Cordier, who was later to become a Protestant, and the other Wolmar by name, a Lutheran in profession.

Unlike Luther, Calvin was always reticent about himself and his conversion. Beza tells us that Calvin's father persuaded him to study, theology because Calvin "was naturally inclined [to theology]; because even at an early age, he was remarkably religious, and was also a strict censor of everything vicious in his companions." Calvin, in an autobiographical note found in his letter to Cardinal Sadolet wrote:

When, however, I had performed all these things (satisfaction for offenses and fleeing to the saints), though I had some intervals of quiet, I was still far off from true peace of conscience; for, whenever I descended within myself, or raised my mind to thee, extreme terror seized me - terror which no expiations nor satisfactions could cure.

Calvin came to Paris at the very time when Reformational ideas were altering the thinking of many. In 1533 Nicholas Cop became rector of the University in Paris and delivered a plea for reformation in his inaugural address, which some claim was prepared by Calvin. Persecution broke out when a paper, sharply critical of the mass, was widely distributed in Paris and a copy was nailed to the palace door. Cop and Calvin were forced to flee for their lives. And so Calvin was brought to the point where he repudiated the church of Rome and wrote his first theological work, a paper on, of all things, soul sleep.

These must have been years of intense study in the Scriptures because Calvin began his work on the Institutes during this time, the first edition of which was published in 1536.

But whether Calvin liked it or not, Geneva was to be his home for the remainder of his life. It all started when Calvin, on his way to Basel, was forced to detour through Geneva. In this city he spent the night thinking that he would come and go unobserved. But his presence was noted and Farel was informed. Farel immediately visited Calvin and implored him to stay in Geneva and help with the work of reformation. Calvin was adamant in his refusal. Shy by nature and determined to devote his life to scholarship and study, Calvin wanted no part of the turmoil which would result from efforts to make Geneva a city devoted to the truth of Scripture. But after calling down from heaven curses upon Calvin should he refuse, Fare1 persuaded Calvin that his place was indeed in the city.

The city, with the effects of many centuries under Roman Catholicism woven into the fabric of its life, was filled with every vice and required great labor to bring its citizens under the yoke of the gospel. To accomplish this, Calvin began teaching, convinced that instruction in the truth was the only road to reformation. He began expository lectures on Paul and the New Testament, and a year later was ordained a pastor.

Together Farel and Calvin drew up a confession of faith and rules of discipline which were approved by the Council. In fact, the Council supported all the efforts for reform in doctrine, liturgy, and morals.

But that did not mean that the opposition had been persuaded. Gradually Calvin's enemies were able to marshal their forces. Their opposition was especially against the Catechism and the laws which had been passed against prevalent sins. As they gained strength, they gained numbers on the Council and were able to moderate the efforts towards reform.

Two issues especially brought things to a head. The Council of 200 decided to instruct the reformers to practice open communion so that no one could be barred from the Lord's table. This was a death blow to Calvin's discipline. The second issue was a decision by the Council to make use of Bernese liturgy in the worship. Calvin did not object as such to the liturgy used in Berne, but he did object strenuously to the right of the Council to decide such matters for the church. Neither would budge, and the result was that the Council passed a decision to expel Fare1 and Calvin from the city.

More in this category: « John Calvin: Father of Calvinism (2) The Bible, a Divine Book: John Calvin's Doctrine of Holy Scripture »