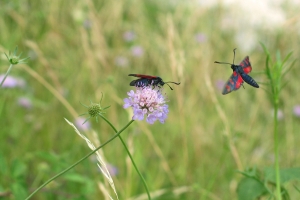 Wednesday the 1st of December

Although it is claimed that God loves everybody and has a grace that rests upon more than those whom He chose eternally in Christ, the Scriptures teach something quite different. In Psalm 11:4-5 we read: "The Lord is in His holy temple, the Lord's throne is in heaven: His eyes be hold His eyelids try, the children of men. The Lord trieth the righteous: but the wicked and him that loveth violence His soul hateth."

That He tries the righteous means that they are already righteous in Christ and that He purifies them as silver is tried by fire. And those who trust in God will see that, when the wicked bend their bows to shoot their arrows, God is purifying His church and polishing her members so that they can reflect His glory more fully.

Our flesh does not like these trials; but through these afflictions God purifies and strengthens the faith of those who were chosen in Christ. Those outside of Christ, the wicked unbelievers whom He hates, He punishes; and the fire He sends upon them destroys them. Rather than building them up, He is casting them down to everlasting punishment. Listen to our versification:

The Lord in His temple shall ever abide;
His throne is eternal, whatever betide.
The children of men He beholds from on high,
The wicked to punish, the righteous to try.

These trials are a blessing to His church. The prosperity and wealth of the unbelievers will bring them to everlasting woe.

Meditations on the Heidelberg Catechism

Song for Meditation: Psalter number 270
Why not sing along??

Quote for Reflection:
" ... experience is ... said to be the mistress of fools because those are fools that will not learn till they are taught by experience, and particularly till they are taught the danger of associating with wicked people ... See how pernicious a thing it is to join in friendship and society with evil-doers. It is a hard matter to break off from it. A man may much better keep himself from being taken in the snare than recover himself out of it." --Matthew Henry on Jehoshaphat